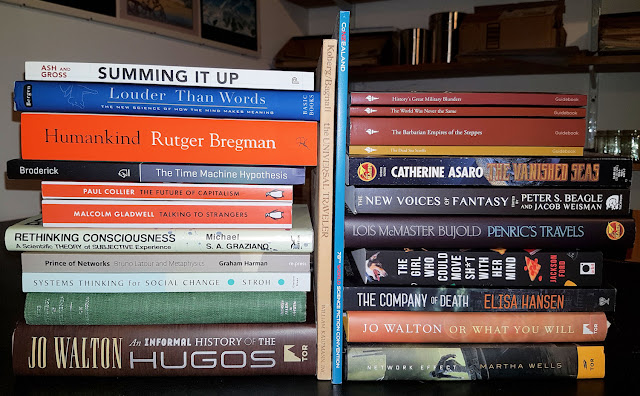 Lily Chan and her boyfriend Sergei Pavlov are software developers at the high tech Amaya company in San Francisco. Sergei is reassigned to the secretive Devs project, disappears, and then security video of his suicide turns up. Lily is initially distraught, but then suspicious. She starts to investigate, and discovers the Sergei was murdered when he tried to steal Devs code. Her own life is at risk as she works to discover what the Devs project is actually trying to do.
The whole premise is bonkers. SPOILER: the Devs team are developing quantum computer code that can retrodict the past from the current state of the world. (It can also predict the future, but the team are forbidden to use it to do that. Yeah, right.) My first snort of derision was when Sergei asks how big the quantum computer is, and Forest answers “a number that it is meaningless to state”, while they are looking at a machine that has about 50 qubits in the real world.
At one point we see a crystal clear rendition of an episode from tens of thousands of years in the past. This is, of course, all impossible, for so many technical reasons. At another point one of the team asks Lily to name something that in not determined by something earlier: everything she says is refuted. The one thing she doesn’t suggest is Schrödinger’s cat, or some other quantum process. (And even if we ignore quantum mechanics, the very technology central to the plot, we know that chaos means that even a deterministic system can’t necessarily be predicted, or retrodicted, because of sensitive dependence on initial conditions. Okay, I’ll stop the dynamical systems lecture now…)
Also, everyone works on the assumption that the computer’s predictions of the future (because, yes, of course they do use it for that) are inevitable. There’s a scene where the predictions are running a couple of seconds ahead of a group of people watching the prediction; no-one even tries to do something different. Lily, apparently, is the only person who can do something different from the prediction. It all ends nonsensically in a computer simulation.
So why do I say it is “worth watching”? Because the slow calm pace (even of a couple of murders!), the beautifully shot soft, rich, misty San Francisco, the amazing soundtrack, all add up (even with occasional shouting at the screen) to a dreamily beautiful experience.
Even if the premise is bonkers.
at 21:35 No comments:

Gretchen McCulloch.
Because Internet: understanding how language is changing.
Vintage. 2019

Linguists study language in all its forms. Spoken language is the primary form, but written language is also of interest. Whilst most spoken language is informal, spontaneous, conversational, most written language is formal, studied, edited. Well, that was the case until the internet, with the explosion of informal writing in emails, texts, chats, and so on. This has provided linguists with a rich resource, with no recording and transcription required. McCulloch’s books covers a wide range of investigations into this informal internet language, and how it has been changing over time.

McCulloch explains why a full stop at the end of a text appears passive-aggressive, the evolution of emojis and why they aren’t a language, why the internet has enabled videophones when previous attempts failed, and multiple other fascinating insights into this new form of language.

Vicki Hearne.
Adam’s Task: calling animals by name.
Akadine Press. 1986
This is a book about taking domesticated animals seriously: training them, respecting them, and treating them as creatures with their own complex, non-human internal lives. It provides a deeply fascinating account of how domesticated animals relate to humans, and of our responsibilities to them. It is mostly about mostly dogs and horses, told through a series of in-depth stories of particular animals Hearne has trained, plus a chapter on how different cats are.

It is also a book about building a philosophy of communication with domesticated animals. No behaviourism or anthropomorphism or sentimentality, but instead a deep understanding of their existence and differences.

This is a difficult book to summarise, but it is an engrossing read. I was completely hooked, and devoured it in just two sittings. It is an inspiring view into minds simultaneously alien, and yet co-evolved with our own, so that we can communicate meaningfully, if we take the time to learn how.

For all my book reviews, see my main website.
at 08:26 No comments:

I recall when this first came out hearing a lot of fannish criticism, from the uniforms to the plot. I hadn’t heard whether that died down during the season or not. But we thought we’d give it a try anyway.

So, we are in the Star Trek universe, about 100 years after Enterprise, and 10 years before the Original Series. I’m not sure if it joins up with the original TV timeline, or the new movie series timeline (which I personally consider to be non-canon); maybe that never becomes clear. Michael Burnham, adopted daughter of Sarek and Amanda, is cashiered for mutiny at the start of the Klingon war with the Federation. Despite this, she ends up on board the starship Discovery, with its experimental spore drive, a key weapon against the Klingons.

This is not your typical light optimistic Star Trek. It unfolds into a dark season arc; it has a (deliberately) non-funny Harry Mudd episode, a “Groundhog Day” episode, a Mirror Universe episode, a lot of very nasty Klingons, a lot of very nasty Terrans, a captain acting dubiously, Starfleet acting dubiously, and more. It plays like grimdark non-canon Star Trek fanfic (what happened to the spore drive? why had we not seen Kelpiens before, or since?), yet also weaves in bits of early Original Series background.

It starts off slowly, but as the existence of the arc becomes established, the tension mounts. Characters die. Other characters are not what they seem. There are several jaw-droppingly unexpected moments. It’s really rather good.

Armageddon is coming. Still, it’s not the end of the world…

The angel Aziraphale [Michael Sheen] and the demon Crowley (originally the snake Crawly) [David Tennant clearly having immense fun] have been on earth since the beginning of time (that is, about 6000 years), slowly become unacknowledged friends, and the only immortals around. But now time is up. The Antichrist has been born, and it’s Crowley’s job to make sure he’s placed with the American Ambassador, ready for Armageddon in a few years time. But Crowley messes up, and the boy is placed with a surburban British couple. Apocalyptic hijinks ensue.

This is Neil Gaiman’s adaptation of the book by him and Terry Pratchett (I haven’t read the book). Some might not feel it’s a good idea to watch an end of the world tale during a global pandemic lockdown, but it felt appropriate. There may be a few places where Gaiman is simply having too much fun, but on the whole this is a great series. It is clever, funny, scary, weird, sarcastic, touching, inventive, and wonderfully irreligious. 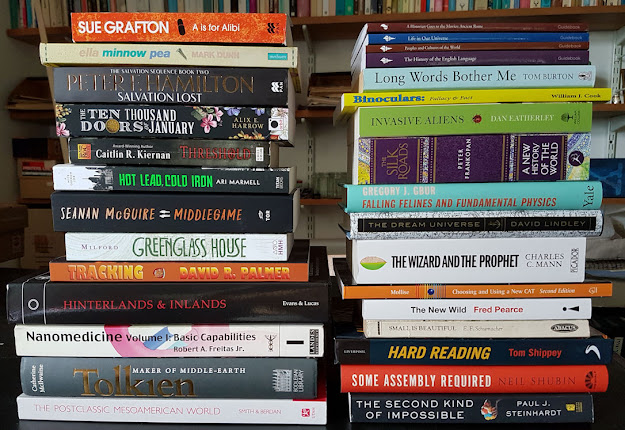