as I arrived at work this morning...

Labels: driving, weather
Nothing as bad as the polar vortex affecting North America at the moment (thank heavens!), but still a tad nippy: 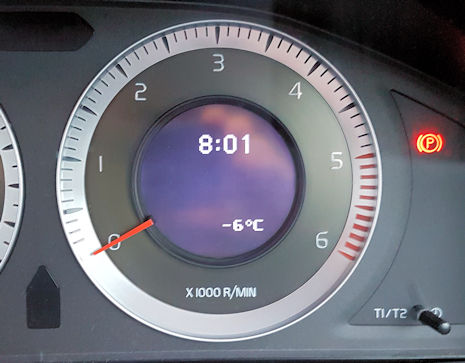 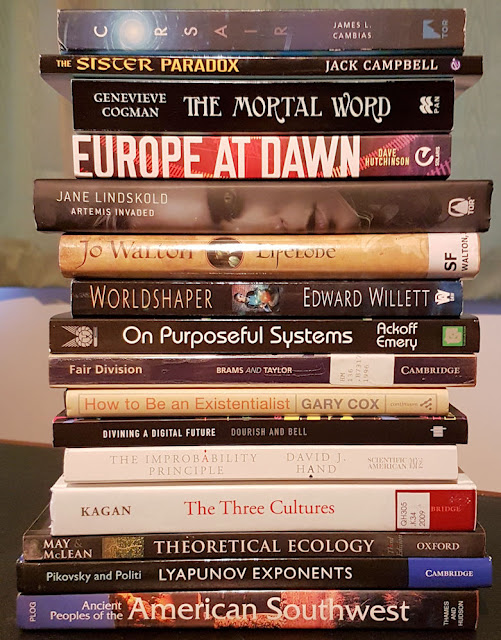 book review: A Burglar's Guide to the City

Geoff Manaugh.
A Burglar's Guide to the City.
Farrar, Straus and Giroux. 2016
There is a standard way to use a building: enter by the doors, look though the windows. There is a standard way to use a city: travel along the roads. Burglars don’t use buildings and cities in standard way: some enter buildings though windows, drop through hatches and ceilings, cut through walls; some move around cities through tunnels, either pre-existing or self-dug. Manaugh describes many of these alternate uses: some exceedingly clever, some just plain dumb. And he describes attempts to thwart the burglars, from law-enforcement helicopter patrols to high security panic rooms.

I have come across, in fiction if not in reality, many of the concepts here, but they are all engagingly presented. One aspect I found particularly intriguing was how law enforcement could get lost in certain kinds of locations. In one case it was helicopter pilots over a regular grid of streets, in another it was officers on the ground in a huge building with several identical parts. Both were lost in “a maze of twisty little passages, all alike”. We know the solution to this: drop landmarks. Law enforcement would like home owners to paint identifiers on their roofs. Alternatively, architects could design more varied structures: “a maze of twisty little passages, all different”, with the necessary landmarks already present.

Being able to think “sideways”, like a burglar, is a useful skill when designing any artefact: it will be misused, if not on purpose, then at least accidentally. Having these misuses catered for up front in the design is a plus. Having these literally concrete examples in mind can makes for more vivid analogies when trying to think sideways.

For all my book reviews, see my main website.
at 12:00 No comments:

film review: Spider-Man: Into the Spider-Verse

Labels: film, review, science fiction, spider
Miles Morales is a nerdy kid, sent off to a high powered school, but who prefers producing graffiti art with his shady uncle. One time, he gets bitten by a spider, and starts manifesting strange abilities. On returning to the place, he finds Spider-Man (Peter Parker) fighting KingPin over a huge accelerator; Parker hands Morales a data stick that can close down the accelerator. The accelerator has opened a rift in the space-time continuum, and several alternate parallel universe versions of Spider-Man fall through. Morales must gain control of his spider powers, and work with the other spiders to close down the accelerator before the universe is destroyed.
I confess when I started watching this, I didn’t know it is an origin story, and that there is a new Spider-Kid on the block. That means I probably missed some in-references. But even coming to this relatively cold, I still found it hugely enjoyable. It takes a while to get going, as Morales’ pre-bitten character is established. But the film is clever, and knowing, and funny, and moving, and self-referential: every Spider-character gets an increasingly funny origin-narration; Peni Parker and her robot are drawn subtly differently in anime style; there’s a Stan Lee cameo; Spider-Noir’s monochrome character is drawn using different sized black dots to make shades of grey; the tingling spider-sense seems to be of use only to detect the various other Spider-characters; Aunt May’s response to the various alternate Spider-beings is priceless.

I’m not sure about the message on studying: Morales has to work hard at his new school, where all the kids are bright, but to learn how to use his new powers, he seems to only need to want hard enough, and spung, he gets perfect control. No 10,000 hours of practice needed for super-hero skillz, it seems.

I did some surfing after watching the film, and discovered all these Spider-characters pre-exist in the literature. So I hope there are more films in this multi-verse: having a larger cast of the “same” super-hero riffing off each other gives very rich possibilities.

I now have a hate-on for Decatur Public Library

Labels: books
I buy a lot of books, many second hand, some ex-library books.  I’m used to ex-library books having stickers and stamps and what-not, including “withdrawn” stamps.  Such identifying marks are not pretty, but they rarely damage the book.

Decatur Public Library: shame on you.