Labels: ducks
Eleven ducklings came home to roost tonight.  They are getting bigger, and don't clump together so closely, which makes them a lot easier to count, if not to photograph.

keeping it in the family

Labels: lol
I've just had a letter from NS&I, encouraging me to buy more Premium Bonds.  I was intrigued to see who had sent it:

I wonder if the sinister "Agent Million" is in fact Basildon Bond?

why proofreading is hard

Labels: cognition, font, language, psychology
Proofreading is hard, because there's a lot of processing going on between seeing and reading.


After reading the
the sentence, you are
now aware that the
the human brain
often does not
inform you that the
the word 'the' has
been repeated twice
every time.

We are pretty insensitive to letter shape (fortunately, given the plethora of fonts), so can quite readily overlook O-0 and I-l-1 problems, although these are worse in some fonts than in others.  An extreme example doing the rounds at the moment (although it's not new), based on maximal substitution of digits for letters, is:

By it's not just doubled words and simple substitution that we can overlook.  The most extreme example I've seen is:

Aoccdrnig to a rscheearch at Cmabrigde Uinervtisy, it deosn't mttaer in waht oredr the ltteers in a wrod are, the olny iprmoatnt tihng is taht the frist and lsat ltteers be at the rghit pclae. The rset can be a toatl mses and you can sitll raed it wouthit porbelm. Tihs is bcuseae the huamn mnid deos not raed ervey lteter by istlef, but the wrod as a wlohe.

Spell checkers, though, are a boon for many of these problems.  So today's proofreaders can concentrate on higher-level issues 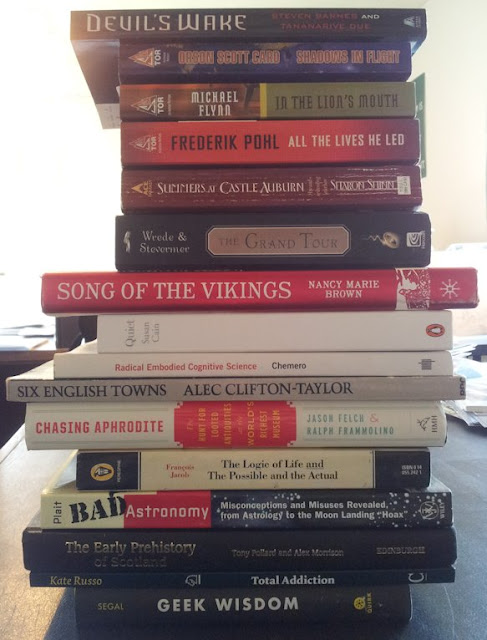 All I have to do now is database them, ready to be added to the catalogue on my website.

Labels: ducks
It seems that this year's ducks are not maintaining the 100% survival record of last year's. 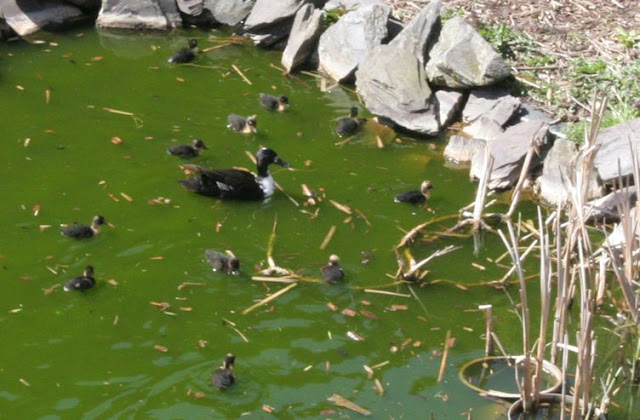 Labels: research, web
I have had my website since the mid 1990s.  I have had this blog since early 2011.  But I have resisted social networking.  No Facebook, no Twitter, no nothing.  Until yesterday.

I have finally succumbed, to Google+.  A colleague had just set up a "community" for a small group of us to collaborate on our research project.  So I clicked for an account, joined his community, added people to circles, and stuff.

Then, in another meeting yesterday, we decided to set up another community, for a different research collaboration.  Zero involvement to two communities, in about six hours!

So I am now networking -- but only in gated communities. Antisocial networking, I suppose.
at 14:59 No comments:

Labels: garden, tree, weather
Our apple tree, full of pent-up energy, is heaving a sigh of relief that spring has finally sprung.

Evernote and the Con

Labels: Bradford, computer, Evernote, holiday, science fiction
Every year we attend the British National Science Fiction Convention, or “Eastercon”. My first Eastercon was in 1984, and we haven’t missed one since 1996. It’s a great four days, of guest of honor talks, of serious scientific talks, of panels discussing authors and sub-genres, of silly SF-themed quizzes, and of meeting up with friends.

I take notes at cons, partly as a conditioned reflex, and partly because there are interesting ideas, and suggestions of new authors of books, that I want to follow up later. I have put some of my notes up on my website. But the last couple of years, I haven’t had the time (or the inclination) to transcribe the resulting 30–50 pages of notes, so they are languishing on paper only.

Recently at work, I’ve moved from paper to a computer-based daybook, based on Evernote. It started as an experiment, to see if it would work, but within a month I had abandoned paper note taking completely, and am exclusively Evernote-based. So I decided to trial Evernote at this year’s Eastercon, too. Here’s how it went. 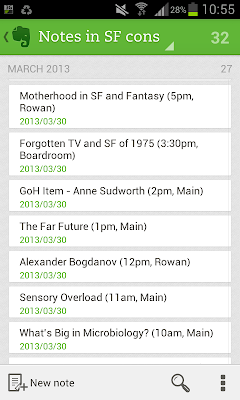 
Gone are the days of waiting to get the Con programme guide on arrival at the con hotel. Nowadays it is up online in advance. So the day before we were due to drive to Bradford (these cons are in such exotic locations) I sat down with the online programme guide, and decided which items I would attend, from the four parallel sessions. First I created a new Evernote notebook for SF cons. Then I made a new note for each chosen item, adjusted its “creation time” to that of the item itself, and copied in the item title, location, and abstract. This had the helpful side-effect of giving me a schedule I could easily consult on my phone when I wanted to know where I was supposed to be next, and a reminder of what it was about. 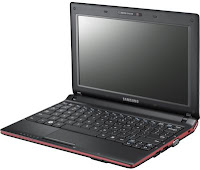 I used the same Samsung N145 Plus Netbook for note-taking that I use at work. This has a 10" screen, and a nice keyboard that accommodates my just-about-4-fingered, semi-touch typing skills (although the Caps Lock is a bit too easy to hit accidentally).

It weights in at 1.2 kg, which is fine for toting around between talks, but after a couple of days of it resting on my lap as I took notes, I became uncomfortably aware of its two sharp little feet at the back. It also runs quite hot. However, the battery is nicely long lasting: the Friday and Monday were less than full days, and I got by with a single charge; the Saturday and Sunday, being longer, required a recharge. One day that involved leaving it charging in the hotel room over dinner; the other day I found an unoccupied power socket in the programme room, and sat by it for that item.

It was all very straightforward to use: arrive at the item, sit down, open netbook, type in my password, click on the item’s note, and start typing. The keyboard is quiet, and so (hopefully!) the sound didn’t disturb anyone around me. And this set-up has one great advantage over manual note-taking. In the main programme hall, tech switches the lights off during items (I assume this is to aid with recording said items). This makes it rather difficult to take hand-written notes. But with the netbook, I just closed it up slightly (to around a 90 degree angle), which directed enough light from the screen to illuminate the keyboard sufficiently. Another advantage: no writer’s cramp. A further advantage: the notes synchronise to the cloud, so I didn’t have to make backups during the con.


Back home, I synched Evernote on my desktop machine, and started tidying up the notes, correcting spelling mistakes, removing irrelevant and incomprehensible bits, and tracking down interesting references and linking to them. This took about half a day (partly because I was spending time reading up about some of the interesting stuff I’d found). Once I was happy with the notes, I made a new note to act as an contents list for the entire event, comprising a bullet list of links to each of the item notes. That was very easy to do using Evernote’s “Copy Note Link” function. I sorted the list into earliest first order (rather than the latest first order I usually use), selected all the notes, then exported them as a single HTML file. I edited that file with Notepad++ (my current HTML editor of choice) to add in some preliminary material, and modify some of the formatting provided by Evernote. Hey presto, my con report web page! Everything from “Programme highlights” onward is output from Evernote. All in well less than a day.

What I’ll do differently next time

This was definitely a great success. However, next time I will add a little more markup to my note templates, to tag the title, panellists, and summary parts. This will let me use Notepad++’s regular expression-based search and replace more easily to modify Evernote’s formatting to my specific requirements. And that’s it, essentially.


However, despite these grumps, I’ll be continuing to use Evernote. The more I use it, the ever more useful it becomes, because the more material I have in it, have linked from it, and can access really easily.

oh no, not again

Labels: ducks
So much for chasing off the ducks to stop them breeding in our pond...

Labels: ducks
It's spring (in time of year, if not in temperature), and the local ducks are starting their attempts to make more ducks.  We try to discourage them doing so in our garden, as we don't want to watch the effects of nature red in tooth and claw on the resultant ducklings. (Although last year's autumn crop did all survive to adulthood, amazingly enough.)

So, when ducks land on the pond, we chase them off.  The last pair I chased did their usual amazing almost vertical take-off, quacking loudly and indignantly.  Then, instead of disappearing into the distance, they landed again, on the neighbour's rooftop.

I didn't realise ducks were perching birds.
at 12:39 No comments: