BLANCHE INGRAM: Oh great. The dude I’m trying to marry likes wearing bonnets and crinolines. I cannot believe this is happening to me again.

Labels: language
What do fresh blood, raw meat, mud, stagnant water, fresh fish, otters, and some species of toad have in common?

Using summer 2012 in the Chinese capital of Beijing as an example, the team estimate that replacing conventional cars with electric ones could have reduced the heat by nearly 1 °C. That in turn would result in a reduction in air conditioning use in the city, leading to a drop of 10,686 tonnes in daily CO2 emissions.  [New Scientist]


For all my social networking posts, see my Google+ page
at 22:00 No comments:


For all my social networking posts, see my Google+ page
at 12:00 No comments:

Labels: complexity
From a distance, this could be a witch’s house in a forest.  But it's a termite mound!

Labels: TPS
8:45. Phone rings.  Foreign accent, claiming that they are calling from Italy.  (I think not.) Wanting to talk to me about something to do with my kitchen.  I say “Do you know what time it is!” and hang up.

Another day, another scammer, I think.

10:45. Phone rings.  Foreign accent: “Are you getting unsolicited marketing calls from overseas?”  Turns out, they are trying to sell me a device that stops overseas calls that my membership of the Telephone Preference Service doesn’t stop.

What a coincidence this happened so soon after an unsolicited call to sell me something, at an unusually early time, where that first caller very carefully emphasised they were calling from overseas.

11:50. Phone rings.  Local accent (makes a change).  “Hello.  We’ve been informed someone at your address has been in a car accident.”

“Absolutely not.  You’re a scammer.”

It must be the (slightly) warmer weather bringing out all the creepy crawlies. 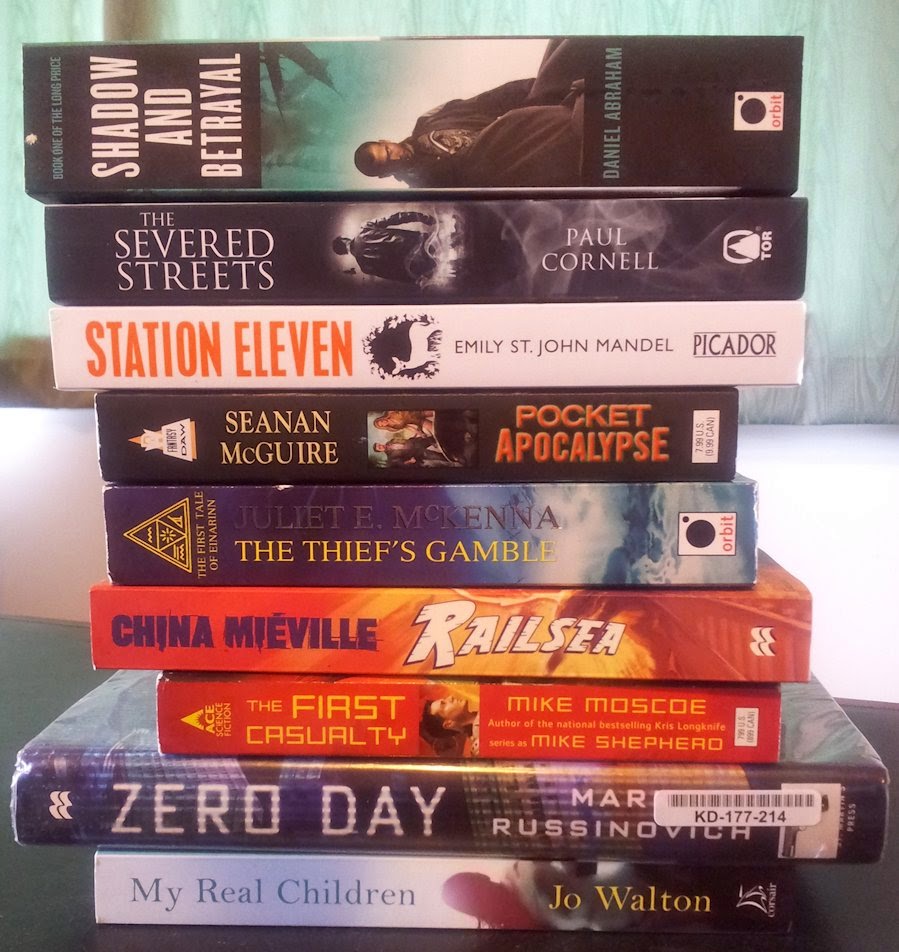 There’s a few new series/authors we are trying out, plus some stalwarts.

Including a new Jo Walton!  Yay!

a different sort of eclipse

Labels: humour
A colleague dashed in my office and said “have you seen the balloon?”  Well, there are often hot-air balloons in the sky, but he seemed quite insistent, so I got up to have a look.  And immediately went to grab my phone to take a photo.

(Our windows at work don’t open more than a crack, for safety reasons it seems, so I had to photograph through the glass almost into the low afternoon sun, hence reflections.)

We all stood around watching and wondering, and then the eclipse started: 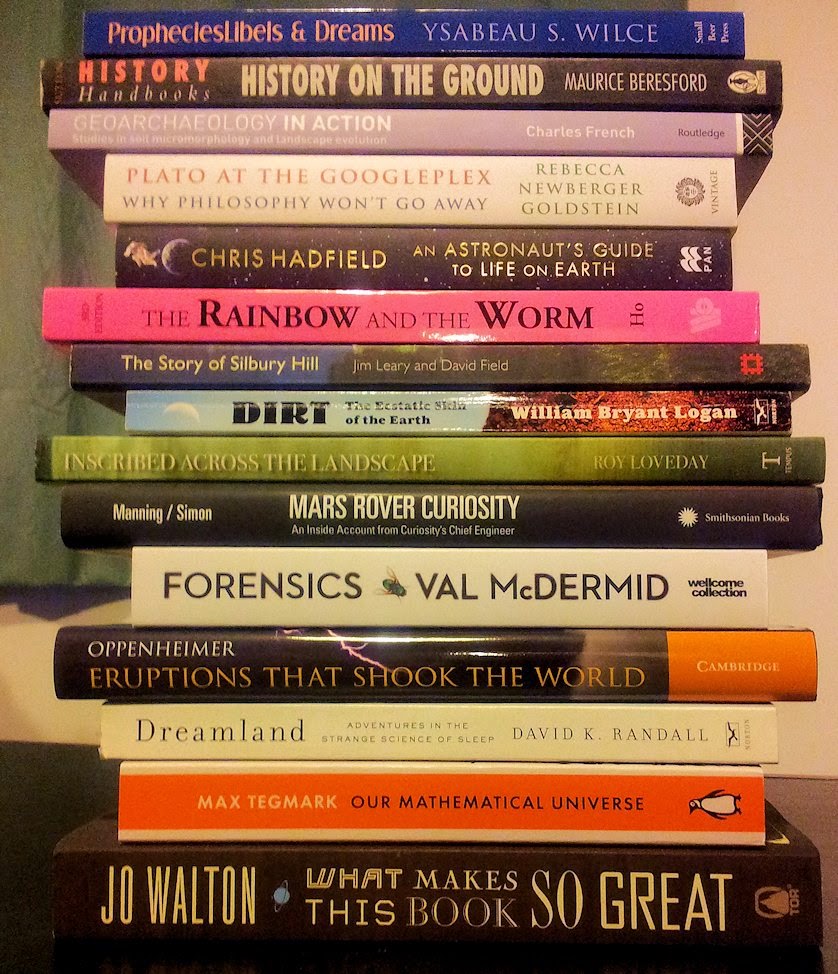 The Jo Walton is a collection of her great SF reviews, many of which I’ve already read on the Tor website.  I can now read them again in proper dead tree format.
at 18:40 No comments:

So, Oliver Queen sort of saved his city from Malcolm Merlin’s plot (apart from the big disaster that essentially was the plot), but totally failed to save his friend Tommy. Now that his raison d’être plot is over, what’s a Vigilante to do?


My name is Oliver Queen. After five years on a hellish island, I have come home with only one goal – to save my city. But to do so, I can’t be the killer I once was. To honor my friend’s memory, I must be someone else. I must be something else.

Well, he can reform (not be the killer he once was, that is, he was just last year), get a new name and a proper mask, and still go after bad guys to “save his city”. Save it from what precisely is not initially explicit, but soon enough a new Big Bad appears, and Oliver is now hampered in his fight by his new morality. And by the ever-increasing number of people who know his “secret” identity: a regular Scooby Gang’s worth.

The villain of the week, plus the arc, are again fun. People fight. People agonise over fighting and over putting their loved ones at risk (hint: keeping someone in the dark about Important Facts in order to Protect Them never works). People become super-strong psychopaths. Some people die. Other people stop being dead. Yet again, the best bits are the flashbacks to The Island, and what happened there to make Oliver Queen the recovering psychopath with superior archery skills he is today.

Worth watching.
For all my SF TV reviews, see my main website.

and then the sun came out

Labels: astronomy, moon, solar power, weather
Here is the solar PV data from dawn to dusk, plotting production against time.  The orange background is what we would expect with a clear sky (no cloud) and full sun (no moon) at this time of year.  The black line shows the production today.  It is way down in the morning, due to the clouds.  But that dip: that’s the eclipse!

Labels: astronomy, moon, video, weather
I had thought that I would have been disappointed to have travelled to the Faroes to see the eclipse, only to be clouded out. Then I saw this.﻿

[via BoingBoing]
For all my social networking posts, see my Google+ page
at 18:30 No comments: 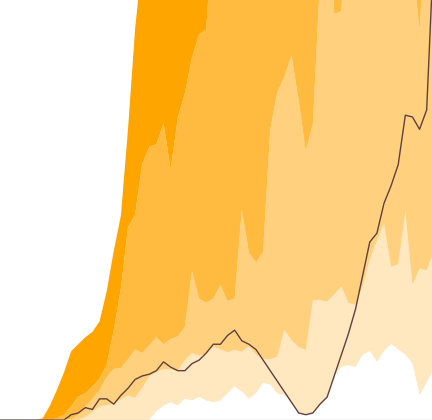 Here is the solar PV data from dawn up to 11 am, plotting production against time.  The orange background is what we would expect with a clear sky (no cloud) and full sun (no moon) at this time of year.  The black line shows the production today.  It is way down on average, due to the clouds.  But that dip: that’s the eclipse!

And the weather now?

the safest way to view the eclipse...

Labels: astronomy, moon, weather
...is from behind a thick bank of cloud.

Labels: astronomy, moon, solar power
I’m looking forward to the eclipse on Friday, and also to see the effect it will have on our solar PV generation.  Of course, it’s not just our solar PV...﻿

For all my social networking posts, see my Google+ page
at 21:30 No comments:

This is what playing cricket looks (and sounds!) like to some English, too. The only game you time with a calendar, and then it ends in a draw. As I understand it, you keep score simply in order to know when to stop playing.

I’ve seen this before, but was reminded of it by BoingBoing.﻿

Labels: language, video
The video combines two languages I don’t understand, but one of them is fascinating to watch.

For all my social networking posts, see my Google+ page
at 21:30 1 comment: 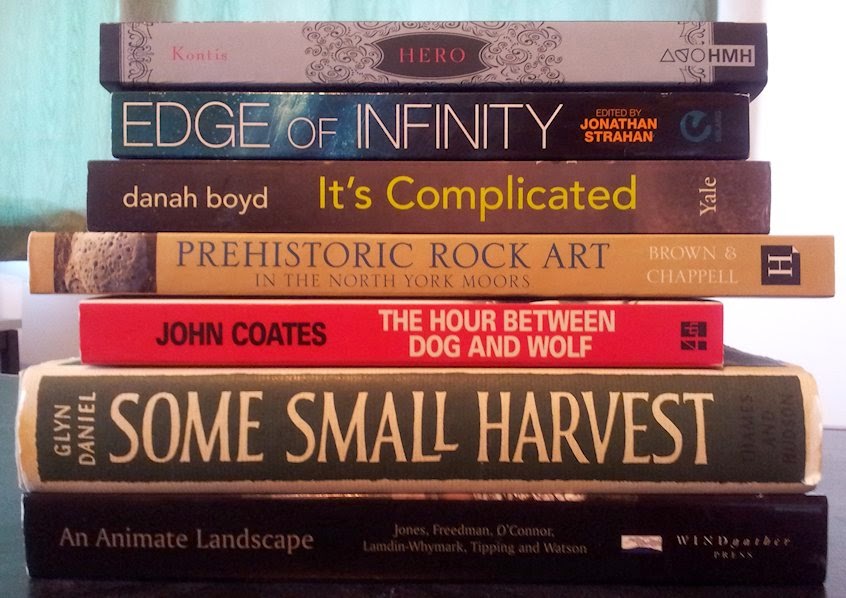 Prediction is very difficult, especially about the future.

Or even about the present, it seems.

We have grown more attentive to the weather since installing solar PV.  Knowing when it is going to be sunny for a long period is useful for scheduling clothes- and dish-washing. (Sunny weather used to be “washing day” for hanging clothes out to dry; now it’s washing day for powering the washing machine.  Plus ça change, plus c’est la même chose.)

I gave up on the default weather app that came with my phone long before we installed solar PV, and downloaded BBC Weather instead.  I’ve had my issues with the BBC weather app before, but today was quite extreme.

Here’s what my phone says the forecast is for the town where I live.

That doesn’t look good: thick cloud at 8am, thinning to light cloud during the mid-morning, thickening again around noon, then rain later.  Okay, not a nice day at all.

Hang on a minute.  Thick cloud at 8am?  But, out the front window it looks like this:

I know weather prediction is supposed to be a hard problem, but getting it so wrong not for the future but now, well, that's another thing.

But tonight was a first: Uranus is quite close to Venus, and so finadable with binoculars, particularly with the 15×70 pair we bought for comet ISON (but then never saw comet ISON). So, tonight I saw Uranus for the first time.

Some people can allegedly see Uranus with the naked eye; I certainly can’t.  And with tonight’s slightly hazy sky, it was a very faint dot, even with binoculars.


I didn't manage a full four planet night this time, as Mars was too low by the time I went out, but still.  Six planets!
at 21:46 No comments:


Mental health problems are on the rise among UK academics amid the pressures of greater job insecurity, constant demand for results and an increasingly marketised higher education system.

University counselling staff and workplace health experts have seen a steady increase in numbers seeking help for mental health problems over the past decade, with research indicating nearly half of academics show symptoms of psychological distress.


In the past, I’ve wondered aloud: the academic contract is for a 38 hour week [hahahahahaha]; the academic culture is one of long hours [60 is typical; 80-90 not unknown]; promotion criteria seem to be based on expectations that are possible within that culture, but not within that contract; when are we going to have the first claim for constructive dismissal? ﻿


For all my social networking posts, see my Google+ page
at 12:06 No comments:

Labels: books, language
Here’s another book for the wishlist:


The word-hoard: Robert Macfarlane on rewilding our language of landscape

For decades the leading nature writer has been collecting unusual words for landscapes and natural phenomena – from aquabob to zawn. It’s a lexicon we need to cherish in an age when a junior dictionary finds room for ‘broadband’ but has no place for ‘bluebell’ 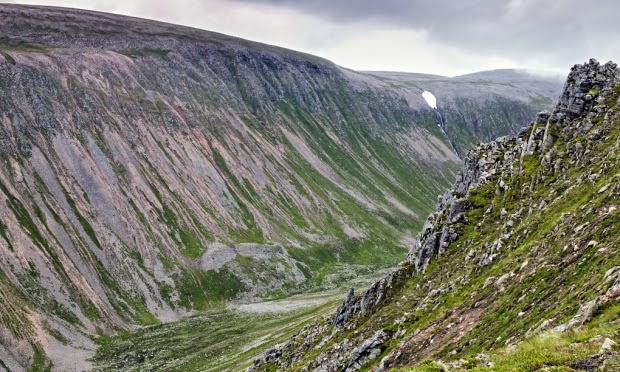 Labels: astronomy, solar power, weather
We've had our solar PV system for over a year now.  One of the many plots we make is its output, measured every five minutes through the day, for each day: 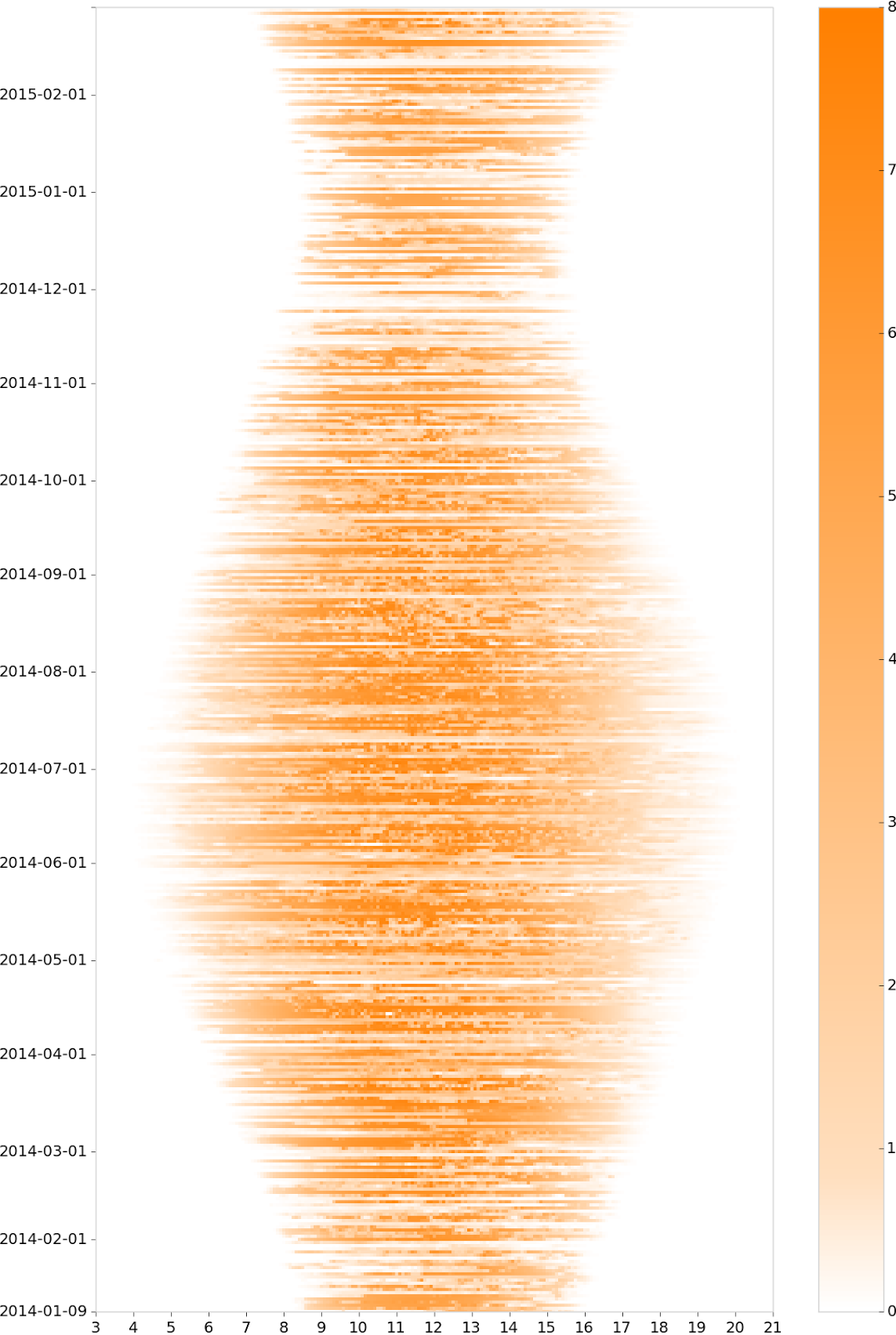 (The horizontal time axis runs from 3:00am to 9:00pm GMT, and the vertical axis runs from January 2014 to February 2015.  The colour indicates the average production in kW in the five minute interval.)

We started generating in January last year, as the days were getting longer.  The changing day length is clearly visible.  Where we live, sunrise to sunset is a mere 7 hours 41 minutes on 21 December, and a whopping 16 hours 48 minutes on June 21.  I got those times from a website, not our generation data.  The system doesn't switch on exactly at sunrise and switch off exactly at sunset: it depends on clouds and scattering and stuff.  But the sinusoidal trend over the year is clear from the chart.

We get more power in June not only because the sun is up for longer, but it also generates more at peak, because the sun is higher in the sky, shining down fully onto the panels, not at an oblique angle.  So last June we saw this average over the month: 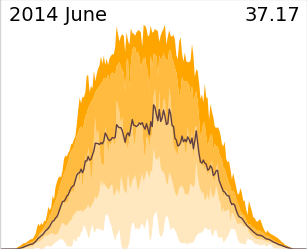 The statistics show how variable the generation is.  On the best June day we got 53.63 kWh, but on the worst June day generated only 18.35 kWh.

Come December the generation plot looked like this, narrower and lower, with only a third the average generation: 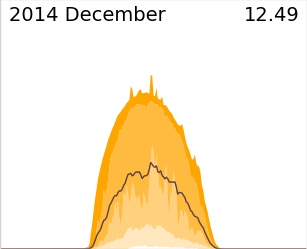 There is still massive variation, from 27.63 kWh to a minuscule 0.34 kWh (it barely seemed to get light at all that day!)