Labels: language
I stumbled across a new word the other day (new to me; it's actually old, and obsolete): apricity, the warmth of the sun in winter.

After a mostly very dull and wet October this year, finally we are experiencing some apricity.  It is one of those lovely clear, still, and crisp autumn days (does autumn count for using this word?), and although the air temperature is just a few degrees above freezing, there is warmth to be felt standing in the sun. 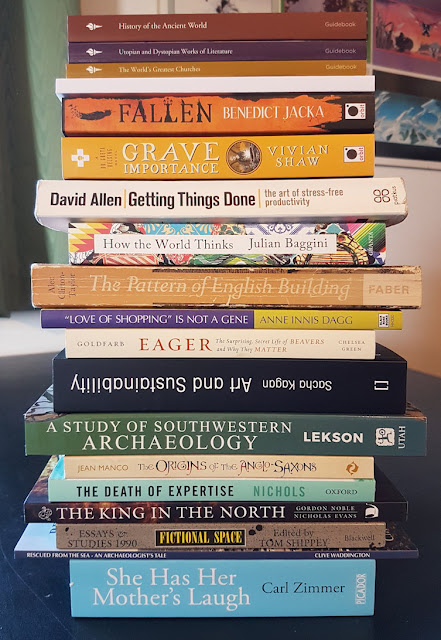 The Kagan book is not upside down; the title is printed on the spine in the opposite orientation to conventional, possibly because it is from a German printer?  Is the convention the opposite in Germany?

Labels: books, garden, solar power
It is 20 years to the day since we moved into our newly-built and actually still-in-the-process-of-being-finished house:
We were eager to move in asap, as we had sold our previous house, and had been living in B&Bs for a couple of weeks.  Never believe builders’ schedules, even after adding a couple of months to their estimate, as contingency!

Over the last two decades, we’ve had one major repair: the underfloor heating needed to be replaced due to faulty pipework. (No, of course none of the installer’s insurance, the NHBC construction insurance, or our buildings insurance covered it: when do they ever?)

We’ve made one major upgrade: in January 2014 we installed solar panels on the back roof, which conveniently faces south.  Inside, there has been continual shelf-building over the years, as we had 9000 books when we moved in, and have 14000 now.

But the main noticable change from outside is in the maturity of the garden:

the “customer” is not always right

Labels: education
One way that university lecturers, and departments, are ranked and evaluated, is by student satisfaction surveys.  Such a customer-based model does not inevitably lead to better eduction, however, as students are not necessarily the best judges of what they have learned:

While students learned more with active instruction..., every measure of satisfaction was lower.


Personally, I prefer a “fitness instructor”-based model, where the students pay the instructor for improvement opportunites and advice (and these should indeed be as well prepared and appropriate as possible), but they have to put in the time, effort, and sweat.  No pain, no gain.

A young man relates his incredible history as an unmarried mother to a sympathetic bartender, who then recruits him into a secret organisation that explains, and causes, all his troubles.

The underlying plot logic is based on Robert Heinlein’s 1959 short story “—All You Zombies—”. I can’t say how comprehensible the movie is without knowing the background; it may need to be viewed twice to pick up earlier clues. To extend it from a short story, certain elements have been added, like more details on the secret organisation, the violin case, the Fizzle Bomber, and the loop’s closure. These additions are all fine, as they tighten the loop. (I do think it would have been interesting to try to include the organisation’s head in the loop, too, but that would have been quite a big deviation from the original story.)

The beginning is a little slow, being mostly narration with flashbacks, but once the narration has caught up to “the present day” (whatever that means in such a time loop) the action carries along on nicely. It follows the original short story’s plot very closely, including the time it is set – the opening bar scene is set in 1970 – which gives it a retro alternate history vibe, 50 years on from then. The main deviation is the added ending, which, amazingly, improves what is already an almost perfect time loop plot.

On the whole, this is a great realisation of a terse and densely plotted short story.

For all my film reviews, see my main website.
at 16:32 No comments:

Adrian Tchaikovsky.
Children of Time.
Pan. 2015
A mad scientist in orbit around a newly terraformed planet fails to realise she has accidentally uplifted a spider civilisation. And when the descendants of the last flight from a dying Earth arrive to colonise, they find themselves embroiled in a potentially tragic game of Prisoners Dilemma.

This is simply marvellous. (I’ll grant the uplift virus as the one piece of magic tech allowed.) The millennia-long timespan of the spiders and humans is handled in two very different, but effective ways. The uplifted spiders are some of the best “aliens” I’ve ever come across: their bio-technology, their social structures, their language and communications, their ways of scanning a computer screen, are all so different, yet so plausible. And the ending, although somewhat rushed, works nicely to subvert the humans’ assumptions.

For all my book reviews, see my main website.
at 16:28 No comments:

Gerd Gigerenzer.
Risk Savvy: how to make good decisions.
Penguin. 2014
There are two main points made in this book.

Firstly, you need to use a different reasoning process about situations where you know the risks and their odds, and the uncertain situations where you don’t; and you need to be able to distinguish these cases. In the case of uncertainty, rules of thumb are usually better than trying to calculate unknown odds. Gigerenzer gives some examples. I particularly liked his discussion of the real Monty Hall problem, rather than the “tidied up” version used for probability calculations. The real situation is much messier, and I have pointed out that you need to know the full rules beforehand: the stated solution works only if the host doesn’t cheat.

Secondly, even when the odds and risks are known, most statistics are so badly presented, possibly to make better headlines, that even the experts don’t understand what they say; you need to look at the real underlying rates. Behaviour X doubles the chance of cancer Y may not be a problem, if the chance of cancer Y is extremely small in the first place. Gigerenzer gives examples of a way to present rates rather than conditional probabilities that makes it much easier to see and understand the true risks.

There are many good cases discussed in here, with a large chunk of the book given over to healthcare. For example, there is a lot about medical screening, false positives, and increased “survival” rates being due entirely to earlier diagnosis, and nothing to do with living longer in total if diagnosed earlier (“lead time bias”). Survival rates are different from mortality rates.

Some of the discussions do feel a little disjointed. In particular, there is early emphasis on how most real world issues deal with uncertainty (rules of thumb) rather than risk (calculating odds), yet much of the book is on increasing statistical literacy. No matter; there is much good material in here.

For all my book reviews, see my main website.
at 16:19 No comments: