I wouldn't stand in its way

Labels: robots, science fiction
My Sunday breakfast ritual includes reading the latest New Scientist magazine over cereal and coffee. Well, when I say "read", I mean skim through mostly, and read a few articles that catch my eye (which always includes all of Feedback, of course).

This week there is an article called "Brain Donors", on how humans can help AIs do their jobs. It includes the sentence:


If a machine cannot understand what you are saying or move around safely, how can you expect it to load your dishwasher? 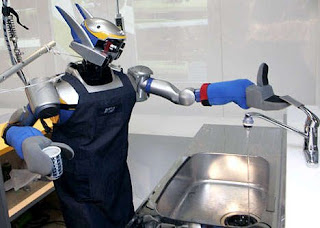 This made me flash back to a plot element from Robert Heinlein's 1956 novel The Door into Summer (which I read in the 1970s, where the "present" part is set, with its "future" part being set ages away, in that shiny futuristic year 2000). In this the hero, Daniel Boone Davis, is an inventor, wanting to invent stuff to help ordinary people. He invents "Drafting Dan" to help him draft the blueprints of his inventions, and "Flexible Frank" to help around the house. In the book, the emphasis is on mechanical reproduction of the ways things are currently done by people. Drafting Dan never happened, but CAD has. Flexible Frank, washing up standing at the kitchen sink, never happened, but dishwashers have.

In other words, the technology that replaces human effort doesn't just trivially reproduce the human behaviour (washing up at the sink): it reproduces the desired effect of that behaviour (clean dishes), but in a way more appropriate to a mechanised solution. 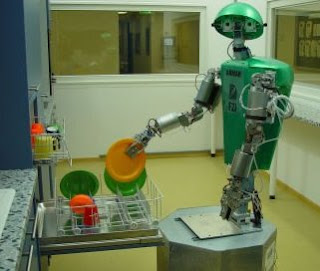 I first experienced a dishwasher at a friend's house in 1977: despite having offered, I was delighted that I didn't have to help wash up after lunch, and thrilled instead to help load this marvellous machine. I was skeptical of the amused claim that "loading and unloading it becomes the chore". Even now, although I no longer positively enjoy the loading task, I still find in preferable to the real chore. But if a robot wanted to do it instead, I wouldn't stand in its way.

However, the moral of this tale is that technology solves our problems in ways different from how we solve them. So I should no more expect this latest chore to be eased by a robot loading a dishwasher, than to expect a robot to stand at the sink washing up.
at 12:06 No comments:

My previous blog post includes a quotation I had saved from a 1999 rec.arts.sf.written newsgroup. I wanted to see if I could track down the origin, for two reasons. Mainly, because I wanted to give a link. Secondly, because my record of the quotation has a misspelling of Alexei Panshin's name. I corrected this in my post, but then I wondered: was the misspelling in the original post (so maybe a subtle part of the troll itself), or my mistaken transcription?

So I googled the quotation, just a few seconds after posting it. And the top hit was that very post!

UPDATE (Oct 2011): I've now found the actual quote, and the misspelling is in the original -- so I updated my post to include the misspelling, happy it wasn't my own addition.
at 10:33 No comments:

Labels: quotations, science fiction
A Boing Boing post introduced me to the concept of a "troll quote": a well known quotation, misattributed to one person, along with a picture of yet another person.

Back in 1999, Michael F. Stemper contributed to the rec.arts.sf.written ultimate troll competition: "Does anybody know if Harlan Ellison will include Alexi Panshin's essay on Heinlein's views on gun control in The Last Dangerous Visions?" So when I was reading the Boing Boing comments, and came across Gulliver's suggestion at #33 --- "There ain't no such thing as a free lunch. ~ Ray Kurzweil. I'd go with Harlan Ellison for sheer piss-off factor." --- I'm afraid I just couldn't help myself.

Nothing I Can Say

Labels: Bonnie Tyler, lego
I thought Total Eclipse of the Flowchart said it all. Then there was this. 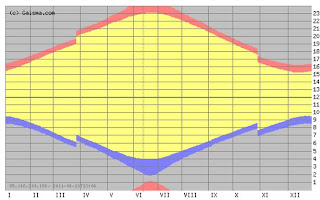 I'm just back from Turku in Finland, from the Unconventional Computing conference. I had a great week listening to talks on computing with chemicals, with membranes, with weird quantum entanglement, with closed timelike curves, and more. (Did you know that if GPS didn't correct 42 microseconds a day for relativistic effects, locations would drift by 10km a day?) The weather was beautifully clear, and extremely hot (for Finland), sometimes even hitting 30C. And, of course, at this time of year, it never really got dark.

I'd been in Turku before, in 2003, at a formal methods conference (nice weather again, but nowhere near as hot). One evening a group of us went out for a meal at the Harald "Viking" restaurant (we didn't wear the helmets...). On the sweet menu was "tar ice cream". Ho, ho, ho, we went, it must be mistranslated. So we asked the server. "Tar? Like you put on the roads?" "Yes" she said. Okay, so I have to order that. It arrives: a scoop of plain white ice cream. I take a hesitant spoonful as the rest of the table watches. "It's tar!"

It had a lovely tarry flavour -- like mild creosote. It is actually pine tar, made from tree sap -- and it's very nice (although not everyone agrees!). This visit, one evening I was in a restaurant, and recognised it as that same place I'd been 8 years earlier. So I looked eagerly for the tar ice cream. Still available, and still delicious.

The next day was the conference dinner. We went to a lovely place in the archipelago, where they were serving a smoky tar drink in a wooden mug -- and the dinner included (among many other kinds of fish) herring in tar. Both nice, but not as good as that tar ice cream.
at 12:49 No comments:

the future price of electricity, part 2

Labels: electricity, estimation
In February, I blogged about a strange item on my electricity bill: npower's estimate of my next year's bill, which was nearly an order of magnitude higher than my current usage.

I've just had this quarter's bill. Same low usage, same high estimate. This made me go back and look at previous bills: had the estimates always been this high? 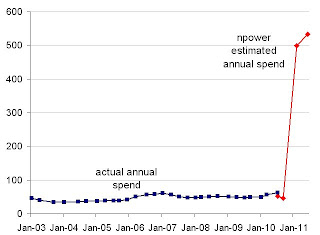 No. The previous two quarters had estimates of about the right amount. Earlier bills had no such estimates: it must be a new "feature". The graph here shows a plot of actual annual consumption (calculated every quarter) and npower's estimate of annual consumption.

The only data points in common (because, of course, I don't yet know my future annual consumption) are very close. Maybe npower do know something about electricity price inflation?