Labels: moon, telescope
This is a photo of the moon tonight, taken with my phone camera, just hand-held, through a 40mm eyepiece on our new telescope, an 8" Schmidt–Cassegrain.  So, a proper camera, properly mounted, is going to be great!


It was a beautiful sight to see: the seas and more craters were much more visible to the eye, which has better dynamic range.
at 22:16 No comments: 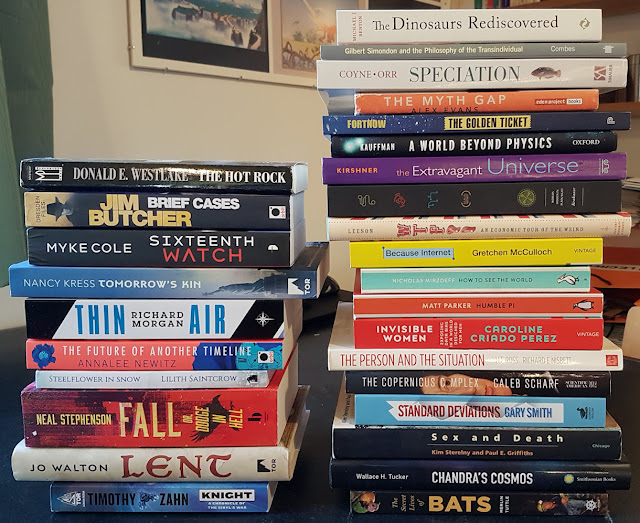 Labels: Covid-19
There are lots of names around: coronavirus, Covid-19, and people are also talking of  SARS-CoV-2.  What's with all these letters and numbers and names?  Well:

See the W.H.O. site for more details of why there are different names.

Labels: Covid-19, video
I was supposed to be giving a public lecture.  It was cancelled.  Then it was reinstated as a virtual event.

I was going to provide a voiceover on slides.  But I was asked for a video of me talking.  So I needed a background a little less cluttered than random piles of books.

Cue black sheet slung from a tripod and stepladder: 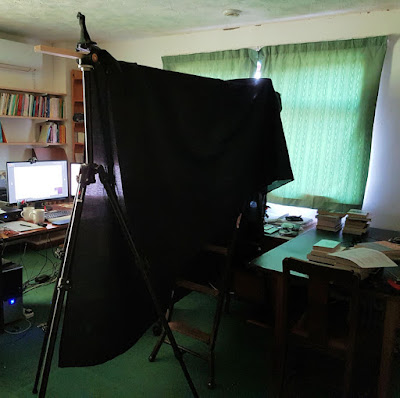 Labels: Covid-19
I saw a workman leave an elderly neighbour’s house this morning.  He was carrying a big tool box, and was wearing protective gloves.

As he left, he stated to take off his gloves.  Because he was carrying the toolbox in his right hand, he stripped off his left hand glove with his teeth. 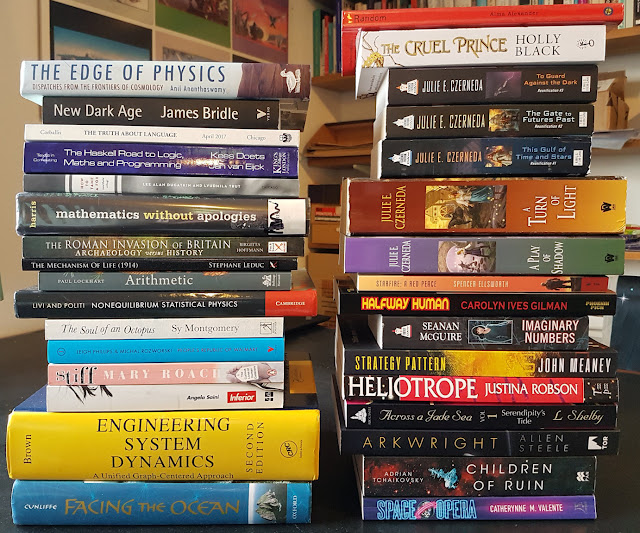 wash your hands to Brahms

Labels: Covid-19, music
There’s a lot of dark humour out there at the moment, but this is definitely on the lighter side.  Certainly beats singing Happy Birthday to yourself!

Labels: computer
As part of working from home, there’s a lot of discussion of various conferencing apps.

I’ve been using Skype successfully for a while, but haven’t been able to get Google Hangouts to work: video fine, people can hear me, but I can’t hear them.  And since Skype works, I’ve been defaulting to that.

But now there’s going to be a lot more remote conferencing, and work is defaulting to Hangouts.

So today, I bit the bullet, and spent time trying to diagnose the issue.

1) Another computer in another room – it can hear me, I can’t hear it.  My speakers, or its microphone?  When I test my speakers in Hangouts, they work.  But so does the microphone on the other machine.

2) Try it on my laptop instead.  Same issue.

3) Try it on my phone.  I can hear that.  So it’s not the other machine’s microphone.  And at least I have a workaround if needed.

4) What’s common between my main machine and laptop, but not my phone?  Chrome.  So, try it on Firefox on the laptop.  It works!  So, it’s a Chrome issue, not a machine issue.  But Chrome and Hangouts are both Google.  Humph.

5) Googling suggests there might be an issue with a Chrome extension.  Fiddle around.  Discover that disabling “Disable HTML5 Autoplay” cures the problem, on both machines.

Yay!  I now have Hangouts working!

Labels: conference, Covid-19, research
At the beginning of the week, nothing I was due to attend had been cancelled.

Here, at the end of the week, four workshops or conferences I was due to attend (in April, May, July, and August) have been cancelled, and in turn I’ve cancelled a workshop we were due to run at the end of March, and will not start to organise the one due to be held in August (at that cancelled conference).

So my diary is now a lot clearer that it was, and we are all discussing how we can move some of this research activity on line.  And I will be working from home for the duration.  I’m lucky enough to have that option, unlike some people.


London was noticelby quiet on my way through.  Lots of bowing and Vulcan salutes at the start of our meeting here, as opposed to handshakes.

I strongly suspect this will be my last outing for a while, although nothing has been cancelled as yet...
at 17:00 No comments:


When tackling a #WickedProblem, even defining the problem domain is a political act - Susan Stepney on tackling #globalchallenges through cross-disciplinarity at the @EPSRC #EPSRC_EngineeringGGCR @GCRF pic.twitter.com/kszFUo9Hyr
— Ellie Gilvin (@egilvers) March 3, 2020


I took the Heathrow Express for part of the journey; the in-train announcements looked as if they had been hacked by an alien.


The view from my room window is over the interior of the hotel, with a rather bizarre moon on display. 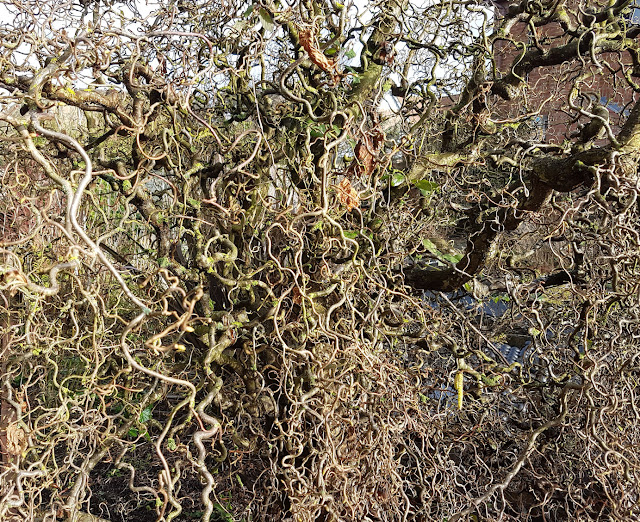