Labels: algorithm, computer, estimation
I was copying a large set of files, when I noticed some peculiar behaviour of the "progress" bar.

I'm used to the Minutes Remaining indicator usually being pretty meaningless (I've seen it go from days, to hours, to minutes, to seconds, over the course of seconds, and it often leaps up by an order of magnitude if I start doing something else on the computer). But this time it seemed even worse than useless.  I watched it for a few moments, then felt compelled to grab a pen and paper.  (I used an antiquated technology to record the data, as I didn't want to interfere with the copy process. These fluctuations were all its own work.) 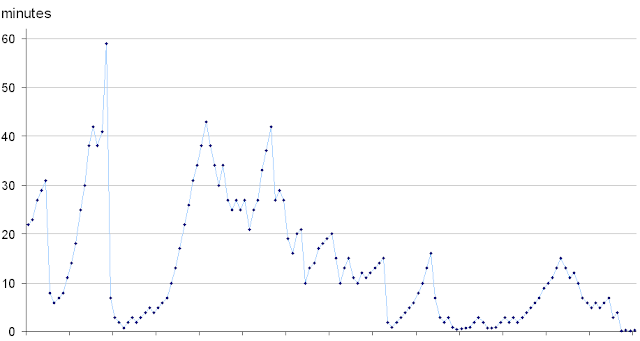 The whole exercise covered a period of a couple of minutes (that is, the line representing the actual time remaining would be almost indistinguishable from the x-axis on this plot).  The final estimate (of 15 seconds remaining, up from the previous 10 seconds) stayed there for about three seconds, and the copy was finally finished.

Well, as they say, "Prediction is difficult, especially about the future".  But one might hope that the algorithm used gave better predictions as time progressed...
at 09:56 No comments: