When "organic" is not "good"

Also, we were gleefully informed (by the physical chemists) that the lifespan of a bench organic chemist was reduced by 10 years on average. I have no idea if this is true (or if it was true then), but it certainly stuck in my mind.

So my strongest association with the word "organic" is "probably a nasty poison!", followed by  "molecules found in living stuff". This makes my reaction to the term "organic food" go something like:

I often have this problem of trying to figure out what people mean when using a technical term I know, but in a non-technical context. My favoutite example is when I first saw a sticker saying "Nuclear power? -- No thanks" with a picture of a smiling sun.  "They want to turn off the sun?  What?  Oh..." 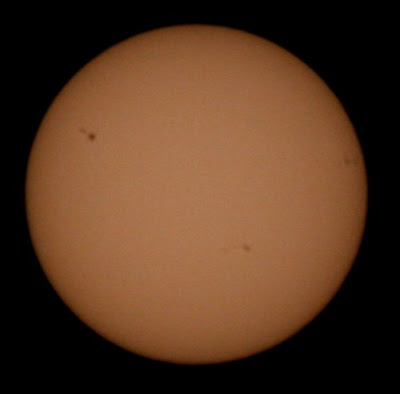 note to self: get an American accent

The speech recognition on the Android phone is pretty good, I've found.  But "Voice Actions", where the phone does something with the recognised speech other than merely google it, wasn't working for me.

Quick google for "Voice Actions not working" gets me the answer. It only works when set to "English (US)".

I change the setting.  Now Voice Actions work.  So, I can send emails, texts, and so on, all without typing.

Except that it no longer recognises what I say...
at 15:29 No comments:

Labels: Dundee, lol, weather
It was very windy in Scotland on Thursday evening. Two colleagues had travelled back up to Dundee after a meeting in York, so I Googled BBC news to see how bad it had been. I was amused to see that


Grampian Fire and Rescue dealt with 75 storm-related call-outs on Thursday night, three times the normal amount. Many calls were to remove trees and chimney pots and a number of trampolines which had blown away.

Trees, and chimney pots, and trampolines! Oh my!
A number of trampolines.
First world problems, indeed.

(My colleagues arrived home safely after a somewhat longer than usual train journey, btw.)
at 22:33 No comments:

Labels: lol
I get quite of lot of email circulars for workshops and conferences. My first thought on seeing this one was, "well, that's not going to take long":

Labels: computer, game
Well, that didn't take long. 17 sets of games, each with 15-21 levels, completed.  Not perfectly: I have a few one star, and several two star, levels, and I found only 4 golden eggs along the way, so not all the bonus levels. (There are cheat pages on the web for finding all the eggs ... but that's cheating.)


So what next? (I have downloaded the Angry Birds "Seasons" set of level, but am waiting for the holiday to play that.)  The game itself suggests I could try for three stars on every level. Now, I admit I did a few levels more than once as I went through, when it seemed I just lucked out, or when I wanted to explore an alternative solution.  But, I prefer to move on once I have achieved what's needed, which here is to "clear the level" of pigs.

It's important not to spend too much time perfecting what you have done, in place of doing new things.  Do something as well as it needs to be done, then move on.  If you have moved on, don't go back and redo, knowing you could do it better now. (Of course you can do it better now: you've moved on!  Only go back if the earlier imperfect version is proving a shaky foundation.)  Polishing is much easier than progression, but is often only a displacement activity.

So, I will maybe try to get better scores on a few more levels (maybe try for no one star levels, anyway) in my "spare time", but it isn't anything like the same as marching on to new levels.

it was 30 years ago today

I got a model B Beeb while I was doing my PhD, and had great fun learning to program.  (I already knew Fortran IV, but until reading Structured Programming with BBC Basic, I hacked, rather than programmed.)  I used my Beeb to do some real science (see the acknowledment section on p544), and even wrote some articles on fractals for Acorn User.  Happy days, and so long ago.

30 years ago, in fact.  That's the reason for the post.  We all know about Moore's law, commonly quoted as "computer power doubles every 18 months" (although of course the reality is more complicated, but let's go with this for now).  One doubling of power doesn't sound much, but what happens after 30 years of Moore's law?

30 years is 20 doubling times. 2^20 ~ 10^6. (Impress you friends with fast mental conversions between powers of two and powers of ten by remembering 2^10 = 1024 ~ 10^3. Caveat: any friend who would be impressed by this feat probably already knows how to do it.)  So that would mean today's PCs are one million times more powerful than the humble Beeb.  Is this true?
Okay, not every feature is a million times more, but combined, today's PCs are easily a million times more powerful than the Beeb.  And for less money!  The BBC Model B cost £399 (which is about £1200 in today's money), but that didn't include the monitor or floppy drive. The Torch dual 800 kB floppy drive cost around £800, although you got a Z80 co-processor thrown in for that.  In March 1987 I bought a 28MB (yes, megabyte) hard drive for £745 (or about £1600 in today's money).

To get a better feel for what this doubling means, think of a slightly older computer, Deep Thought, which took seven and a half million years to calculate the Answer to the Ultimate Question of Life, The Universe, and Everything.  That was in 1978, or 33 years ago, or 22 doubling times, or 4 million times.  If that was a speed improvement, today's equivalent of Deep Though would take only 2 years to calculate the answer!  Not so impressive now.

But wait, you say.  Douglas Adams was a genius.  He would have taken that into account.  The real Deep Thought would have kept upgrading itself, but even so still took 7.5 Myr to calculate the answer.  7.5 Myr is 5 million doubling times, or 10^1,500,00 more powerful.  That would make the Deep Thought who gave the answer 42 to the philosophers' descendents umimaginably more powerful than the original (if such a machine is even possible in the current universe).