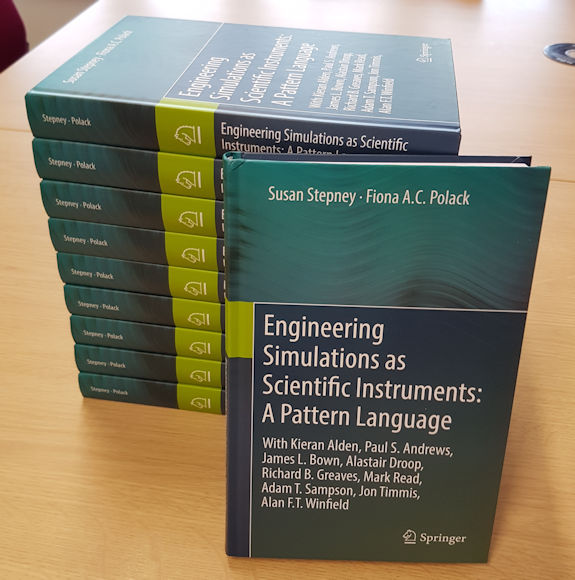 
This book describes CoSMoS (Complex Systems Modelling and Simulation), a pattern-based approach to engineering trustworthy simulations that are both scientifically useful to the researcher and scientifically credible to third parties. This approach emphasises three key aspects to this development of a simulation as a scientific instrument: the use of explicit models to capture the scientific domain, the engineered simulation platform, and the experimental results of running simulations; the use of arguments to provide evidence that the scientific instrument is fit for purpose; and the close co-working of domain scientists and simulation software engineers.

In Part I the authors provide a managerial overview: the rationale for and benefits of using the CoSMoS approach, and a small worked example to demonstrate it in action. Part II is a catalogue of the core patterns. Part III lists more specific “helper” patterns, showing possible routes to a simulation. Finally Part IV documents CellBranch, a substantial case study developed using the CoSMoS approach.


See the Springer site for table of contents.  The Springer official cover in not quite the same as the one I designed a while back.  That’s probably for the best, I suspect.

This is one of the outcomes of our not-that-recent EPSRC project, CoSMoS.
at 18:13 2 comments: 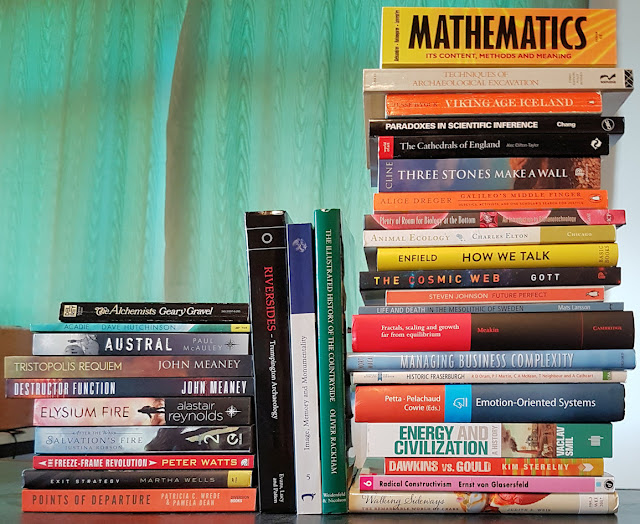 These are the days of miracle and wonder

Amazing time-lapse video of a rocket launch… seen from space!

On November 16, 2018, a Soyuz-FG rocket launched from Kazakhstan, and perched atop it was a Progress resupply ship carrying two and a half tons of materials for the astronauts on ISS. The launch occurred at 18:14 UTC, or just after midnight local time. As it happens the ISS was over the Russian/Mongolian border at that time, far to the east of the launch but high enough above the Earth’s surface to still see it directly.

noise from a hotel

Labels: Christmas, Swindon
I’m in Swindon, at a two day meeting.  The view from the hotel window is surprisingly autumnal, given it is mid November. 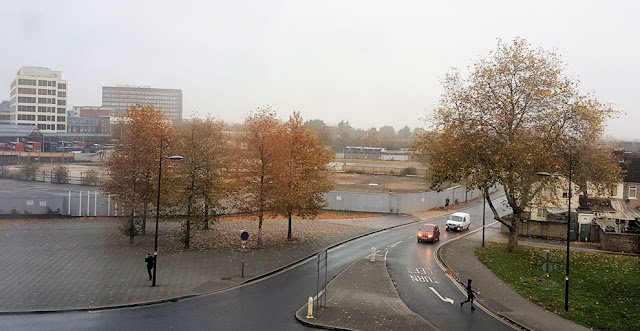 This was the view just before I left for the meeting.  But I was awake much much earlier.

I was woken by a loud buzzing noise.  I thought it was the alarm clock in the next door room.  But it kept going.  I looked at my clcok.  5:45.  The noise continued intermittently.  I thought it might be a water hammer, or a heating rattle.  But it didn’t sound like that.  Of all things, it sounded like a drill: about the right duration of each burst of noise, with that little “chirp” at the end as the load is taken off.  No sleep was possible.  I eventually got up.

When I went down to the hotel lobby on my way to breakfast, I discovered it was a drill!  Christmas decorations were being attached to pillars.  With a drill.  Since 5:45am.

Dawn Foster.
Lean Out.
Repeater. 2015
This slim book is a response to Sheryl Sandborg’s book Lean In. I had already seen Jennifer Dziura’s acid comment on Lean In:


Lean In is an absolutely joyless tutorial on how to give your entire life to a corporation while also having a husband and kids that are a lot of work. If you’re working that hard, there should at least be something rewarding about it.

which gave me a fair idea of its message. Dawn Foster’s response is political, taking apart the underlying assumptions and context.

That context is patriarchal capitalism, where most women are poor and exploited, and simply don’t have the opportunities to Lean In even if they wanted to. Just because a few women can manage to break through the glass ceiling and become rich and successful, doesn’t mean all women can, although it does provide a useful distraction. Any resulting “trickle-dowm feminism” is just as ineffective as “trickle-down economics”; highly successful women are more likely to stick with others of their class than of their gender. And, of course, those rich successful women are relying on the labour of poorer women to allow them to run their lives, by providing cleaning, child care, and so on.

Dawn Foster’s solution is to point to those who Lean Out: women who organise and lobby for decent wages and working conditions from the bottom up. And there are many examples.
A refreshing polemic.

Dan Ariely.
Predictably Irrational: the hidden forces that shape our decisions.
Harper. 2008
Classical economic theory is predicated on self-interested rational actors. But people aren’t rational. So much the worse for classical economics.

Although people aren’t rational, they aren’t randomly irrational, either. Instead, they are predictably irrational, in a way that can be studied and measured, and be built into a more realistic economic theory: behavioural economics.

Dan Ariely, psychologist and behavioural economist, engagingly describes a range of experiments he and his colleagues has performed (mostly on undergraduate students, in the time-honoured experimental psychology manner) to unpick a wide range patterns of irrationality. He looks at the over-strong lure of free items, how we overvalue our possessions, how keeping options open can be a mistake, why shops will often display an expensive option they don’t expect to sell, why we are happy to do things for free we wouldn’t do if paid for, how more expensive items are more effective than identical cheaper ones, how dishonesty varies when cash is involved, how some people choose second best, and more.

I found the chapter on free work versus paid work interesting, the difference being between social norms and market norms. The world is moving us towards the latter, seemingly to the detriment of enjoyment. Similarly the chapter on honesty highlights how people are more honest when cash is involved: while taking a pencil from work is barely noticed, taking the equivalent value in cash would be beyond the pale. Yet we are moving towards a cashless world, maybe to the detriment of honesty?

This is a good read, with the experiments clearly described, and the context and consequences well explained. I am not entirely convinced that the experimental situations, with their small values and low consequences, can be safely extrapolated to larger scale cases, but they are very illuminating. Several of the examples will be useful to help avoid faulty reasoning in certain cases. (Although I already order what I want from the menu, whether or not someone else in the party has previously ordered the same.)

Labels: France, politics, weather
Trump cancelled a planned outing because it was raining.

amidst ceremonies in the French capital to mark the 100th anniversary of the end of the first world war, a planned presidential visit to the American cemetery at Belleau, a site of immense importance to the US military, was cancelled because it was raining.


C’mon, give the guy a break.  Who wants to go out in the rain, after all?