Labels: weather
A cloudy end to a stormy day

Labels: algorithm, books, Christmas, complexity, computer, graphics, mathematics
Here are our Christmas presents to each other.  They are books.  (There are other types of presents?)  The rule is: a book we want, but (probably) would not buy for ourselves.  This criterion is almost certainly impossible for the other to determine, so we suggest options to each other.

many people would rather fail than change

Bits of Evidence from Greg Wilson 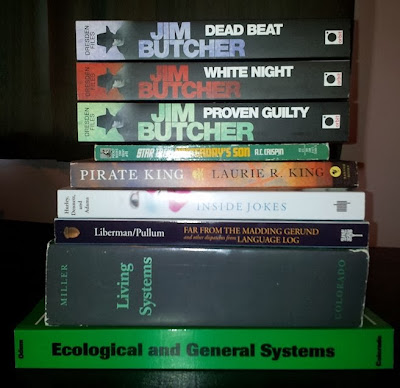 Labels: medicine
I got most vaccines as a child.  I do remember getting chicken pox, though.  It wasn’t nice.

Hmm.  Should I accept the suggestion?﻿

For all my social networking posts, see my Google+ page
at 20:38 No comments:


the reason we started using zero-indexed arrays was because it shaved a couple of processor cycles off of a program’s compilation time. Not execution time; compile time.

wallpaper your apartment in tinfoil

Just because you’re paranoid doesn’t mean they aren’t out to get you.﻿

A while back I changed some of the design of my website to using more CSS.  This left quite a few pages with an <HR> (horizontal rule) at the bottom.  This was the previous way I gave a visual indication of end of the page.  With the new CSS styling, this isn’t needed.  But how to remove them all?  My website has over 21,000 files.  Okay, it’s not that bad: there are only just over 1000 html files that are not auto-generated.  Nevertheless, there’s no way I was going to search and edit 1000 files by hand.  I’d need to write a program.  A program that could parse and edit html.

In my wanderings, I stumbled across Beautiful Soup, a Python library designed to do just that. I had a little spare time today, so I thought I’d investigate it. A little while reading the documentation (yes, really!), and I’d written and tested the <HR> remover:
Find all the tags. If the final one is an <HR>, remove it. And that’s it!

Emboldened by this, I thought of the other change I wanted to make: fix up the ALT/TITLE mess in my IMG tags.  In the early days of my website, I was using the ALT tag not only as an actual ALT tag, but also as a stand-in TITLE tag.  This was because I’d noticed that the ALT text appeared as hover text in the browser I was then using.  I’d thought that was how it was supposed to work, because I didn’t read the documentation (yes, really).  Later I discovered the difference, and have recently been using ALT and TITLE properly.  Also, I hadn’t bothered to give ALT tags to images that are merely decorative, but I’ve recently learned that they should have ALT="" to be properly skipped by screen readers.  So I wanted to fix that, too.  So, back to Beautiful Soup, to write an <ALT> modifier.
Find all the image tags.  For each tag, if there’s both an ALT and a TITLE, do nothing; if there’s only a (non-empty) ALT, copy its text into the TITLE; if there’s only a TITLE, copy its text into the ALT; if there’s neither, make an empty ALT. And that’s it!

Well, actually, that’s not quite it.  The thing that gave me the most grief was the unicode aspects.  My first attempt to write the file back out resulted in mangled non-breaking spaces and bullet characters, which were being written out in Unicode, not as html entities.  A bit of hunting around on the web led as ever to the invaluable Stack Overflow site, which pointed me in the right direction.  After a bit of fiddling, I wrote the adequate, but not totally perfect, solution of:
And that really is it!

I love Python (and all its libraries).

Labels: Trello
I use Trello daily, and now my tablet version no longer looks like a really big phone version.  Yay!

For all my social networking posts, see my Google+ page
at 23:00 No comments:

failing to sequester carbon, once a year

Being able to print address labels removes the chore aspect, and makes the exercise an enjoyable one of thinking about each of the recipients: who gets which card, and why? (Recipients, please don’t overthink this when you see your card: you get the most appropriate one for you, subject to the invisible-to-you constraints of our available pool of cards.)

that's not in the least bit suspicious

Labels: Bonnie Tyler, computer, web
Our internet connection at home travels along the same piece of wet string as does our phone line.  (I’m assuming it’s wet string, based on the bandwidth it achieves.)  Recently it’s been a bit glitchy, dropping out at random moments.  Then the other day I spotted a correlation: it drops out when the phone is in use.  This hasn’t always been the case: I’ve been on the phone to support while using my machine, so this is something new.

We spent a while trying to narrow the problem down. Was it answering, being connected, or hanging up the phone that triggered the event?  No, it was simply calling the number.  Was it one of the filters separating the phone and internet signals?  We tried swapping in and out these gadgets.  Eventually we had pared the system down to a single filter, with no handsets even connected.  Same problem.  Either all 7 filters are broken (not totally implausible, they are cheapo dinguses, all over 10 years old), or the problem lies elsewhere.

What will probably look weird, if not downright suspicious, to anyone monitoring us (not that anyone would do such a thing, obviously...) is what was visible from outside.  To see when the network went down, we watched the blinkenlights on the router.  To load the network during tests, we downloaded a YouTube video, let it play about halfway through to check the network was stable, then called the landline from a mobile, which stopped the network.

The result of this is that we downloaded the same YouTube video, and interrupted its download halfway with a call from a mobile, about 20 times. Moreover, because the network connection dropped out, it would re-establish with a different IP address each time, as provided by our ISP.

Oh, and what was this ultra-suspicious video?  Bonnie Tyler’s Total Eclipse of the Heart, obviously.
at 11:35 2 comments: