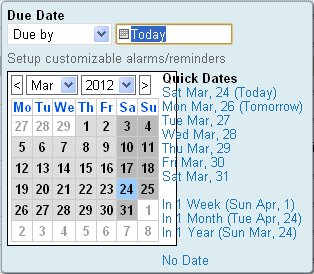 British Summer Time (daylight savings time) is due to start at 2am tonight, so we lose an hour of sleep.  But the Toodledo calendar widget seems to have lost a whole day!

Do I hear music differently from everyone else?  Last night, driving up the A1 to York, I was listening to Classic FM's Tchaikovsky evening.  This included a performance of the Fifth Symphony.  Now, Tchaikovsky's Fifth has long been a favourite of mine, ever since I was first introduced to classical music as an undergraduate.  And more recently, I've found the rousing final movement an interesting possible musical analogue of "open-ended evolution", in the sense that every time you think it's finished (except for the last time, of course!), it continues onwards and upwards, with a variation, or flourish, or difference, or interesting reprise. (Okay, yes, it can sometimes sound a little crude in places, but that can be overcome with a good performance.)

So I was astounded to hear the announcer describe the symphony as "melancholy", and that some had said that Tchaikovsky was "putting on a brave face" in that uplifting (to me) final movement.  What?

This is from a radio station that has a session called Smooth Classics where they seem to think that anything "slow" equates to "relaxing", rather than, on occasion, heart-rending.  So, I decide to check whether it was me, or the announcer.

A quick look at wikipedia suggests ... something else, many somethings else: "gradually transforms into a triumphant march", "Tchaikovsky is expressing optimism with regard to providence", "the entire symphony seems to spring from some dark spiritual experience", "a horde of demons struggling in a torrent of brandy", and "slaughter, dire and bloody".

Labels: books, computer, publishing
I've been debating whether to get an eBook reader like a Kindle for a while now.  So I was interested to read Jo Walton's blog post on this issue, as it covers some of my concerns.

The reason for wanting one is the convenience of being able to carry multiple books easily.  I had a three day trip to Greece recently (two days mostly travel, one and a bit days in Greece), and nearly ran out of reading material because I took only three books (two fiction, one non-fiction), yet those books were a significant fraction of my luggage weight.

A Kindle would help.  Even so, I was pleased to see in the comments phrases like: "I could take one fully-stocked Kindle and an emergency paperback".  This commenter is clearly sufficiently paranoid not to trust the battery life; good.  The fear of being without reading material is widespread; another commenter said: "it's a comfort to know that if I finish the book I'm reading in line at the post office I won't just have to stand in line at the post office without a book".

Being able to change (increase!) the font size is another advantage, which gets more advantageous as the years go by.

My major concern about eBooks, however, is that I absolutely positively do not want to even entertain the possibility of "losing" a book, either because the seller decides to remove it from the device (yes, something that can happen in this Brave New World, that has such vendors in't!), or because the technology becomes obsolete (hey, I've lived through the appearance and subsequent disappearance of cassette tapes, and pretty nearly by now VHS tapes).  Jo's solution is to buy the eBook when the hardback comes out, then the paperback when it comes out later (sometimes several years later: I feel aggrieved I have to wait this long, despite the fact that my reading backlog is several decades).  This is no more expensive than buying the hardback alone, so is a very reasonable approach (particularly since hardbacks are significantly larger than paperbacks, and the major cost of a book is not its cover price, but the space for storing it, which is why I prefer to buy paperbacks, despite the long publication delay).

However, my main amusement from the post was Jo's indignant reaction to Amazon's bragging about the battery life: the Kindle's battery will last for whole a month if you read for half an hour a day.  She realised she was not in the target market.  Who on earth reads for only half an hour a day?  My backlog isn't decades because of the amount I read; it's because of the amount I buy.  It reminded me of the time I saw a half height bookcase (so about 10 linear feet of bookshelf space, if that) for sale, which had a sign on it proudly proclaiming "ample for all your books".  I just fell about laughing.
at 21:11 1 comment:

I've just come out of a fascinating talk by Dr Sue Black and a couple of guys from Bletchley Park, talking about the campaign to save it from terminal decay, and how social media helped.  I'd heard about Bletchley Park, of course (and a visit is on my to do list), and knew of the crucial role it played in WWII, but I wasn't aware of the true scale -- 10,000 people working there during the war, and over half of them women.

One point that fascinated me.  Sue talked of meeting one of the people who broke the code on some of Hitler's personal communications -- and how talking to him about this made the hairs on the back of her neck stand up.  I think we forget how (relatively) recent much important history actually is, how much of it is in living memory, or only one remove. We talk of the "six degrees of separation" between co-existing people.  But it's often a similarly surprisingly small number of links to what we tend to think of as the fairly remote past. Patrick Moore talks of having met Orville Wright and Neil Armstrong.  I've shaken hands with someone who worked for Marie Curie.

But back to the talk.  We were asked at the end, do we think Twitter saved Bletchley Park?  Well, as Sue said, it's not Twitter, it's all the people on Twitter, who tweeted and retweeted, signed petitions, and raised funds and awareness.  It wouldn't have happened without them.  Twitter is just ("just") the technology that enabled them to do this.  Crowdsourcing is powerful, but I think it's safe to say that without Sue's input specifically, Bletchley Park would not be where it is today.  Kudos.
at 20:34 No comments:

a matter of perspective

My Sunday breakfast ritual is to flip through New Scientist, reading the articles that look most interesting (and moaning to myself about the content free graphics mostly used to "illustrate" the longer articles).

I picked up this week's issue, and saw the cover headline: "The Deep Future".  Ooh, I though, I wonder if it's about the death of the sun in 5 billion years, or are they going for life after proton decay in 10^30-odd years, or maybe it's about the really deep future?

Labels: astronomy, Jupiter, Mars, Mercury, telescope, Venus
A good evening's viewing tonight.  In the east, a brilliant Venus and Jupiter high in the sky (getting closer for the conjunction later this month), and down on the horizon, a much fainter but still clearly visible Mercury.

Then, turning to the west: twinkle, twinkle little Mars, like a ruby against the stars.  We just managed to get a quick look at it through the telescope before the clouds closed in.
at 20:17 No comments: