Labels: conference, evolution, Granada, graphics, holiday, language, Spain
I’ve recently returned from Granada, where I was attending the EvoStar conference.  I had a good time, listened to several very interesting talks, apologised to my publisher’s rep for being somewhat late in delivering a book, and gave a talk myself, on “Challenges for Open-Ended Evolution”.

The conference ended early Friday afternoon, and there were a couple of walking trips arranged in the afternoon, for those not leaving until the following day.  I went on the first of these, “Graffiti of Granada, a tour of urban artwork”, lead by J.J. Merelo, who was also the local organiser of the conference.

Granada has a lot of very high quality street art, from local artists and from artists who travel specifically to join in.  We were shown a great selection of it.  A knowledgeable and enthusiastic J.J. explained the various terminology, of tag, throw-up, stencil, blockbuster, wildstyle, and more.  I did at one point ask how it was that he knew all this detailed terminology, but it’s all there on wikipedia.

The weather was gorgeous: bright and sunny, and only just very slightly too hot, so we got lots of good photos.  My camera battery went flat about two-thirds of the way round, but even so, the pictures I got show a remarkable range of talent and styles.

I have often thought that some of the more intricate graffiti enlivens otherwise dead blank concrete spaces, but in Granada it has been taken to a whole new level.

After walking up and down steep hills for a couple of warm hours, I then elected for the bar and tapas option, rather than the second walking trip.
at 15:00 No comments:

Labels: Glasgow, river, science, science fiction, weather
The 65th British National Science Fiction Convention, or “Eastercon” as it is usually known, was this year held in Glasgow, at the Crowne Plaza Hotel.  It was the usual excellent collection of talks, panel discussions, and other events, focussed on Science Fiction.  This year the science talk theme was especially strong, with Dame Jocelyn Bell Burnell as the science Guest of Honour, bringing us up to date on recent advances in astronomy, and a collection of three talks from researchers from the University of Strathclyde, on the science behind some science fiction.

So the con was great fun, as usual.  Not so usual was the weather.  Here’s the obligatory “photo from hotel window”, showing the anomaly.


We had a good view of the Clyde Auditorium, or “Armadillo”, next to the River Clyde itself. That strange circular flying saucer shaped building just behind it is the Hydro.  And that even stranger blue area behind them both is the sky.  It was warm, sunny, and clear for the whole time we were there.  That was quite a contrast to last year’s Eastercon, in Bradford, where there was snow on the ground!

We had flown up to Glasgow on Thursday evening, so had a little time to kill before the con started on Friday.  We had planned to go into the city, but a combination of getting up late and the glorious weather meant we instead opted for a stroll along the Clyde, in shirtsleeves.

Labels: garden
A post about sunshine on the garden, not on the solar panels, for a change.

The yellow rose has poked a branch through the back of the shrubs, and is looking brilliant. 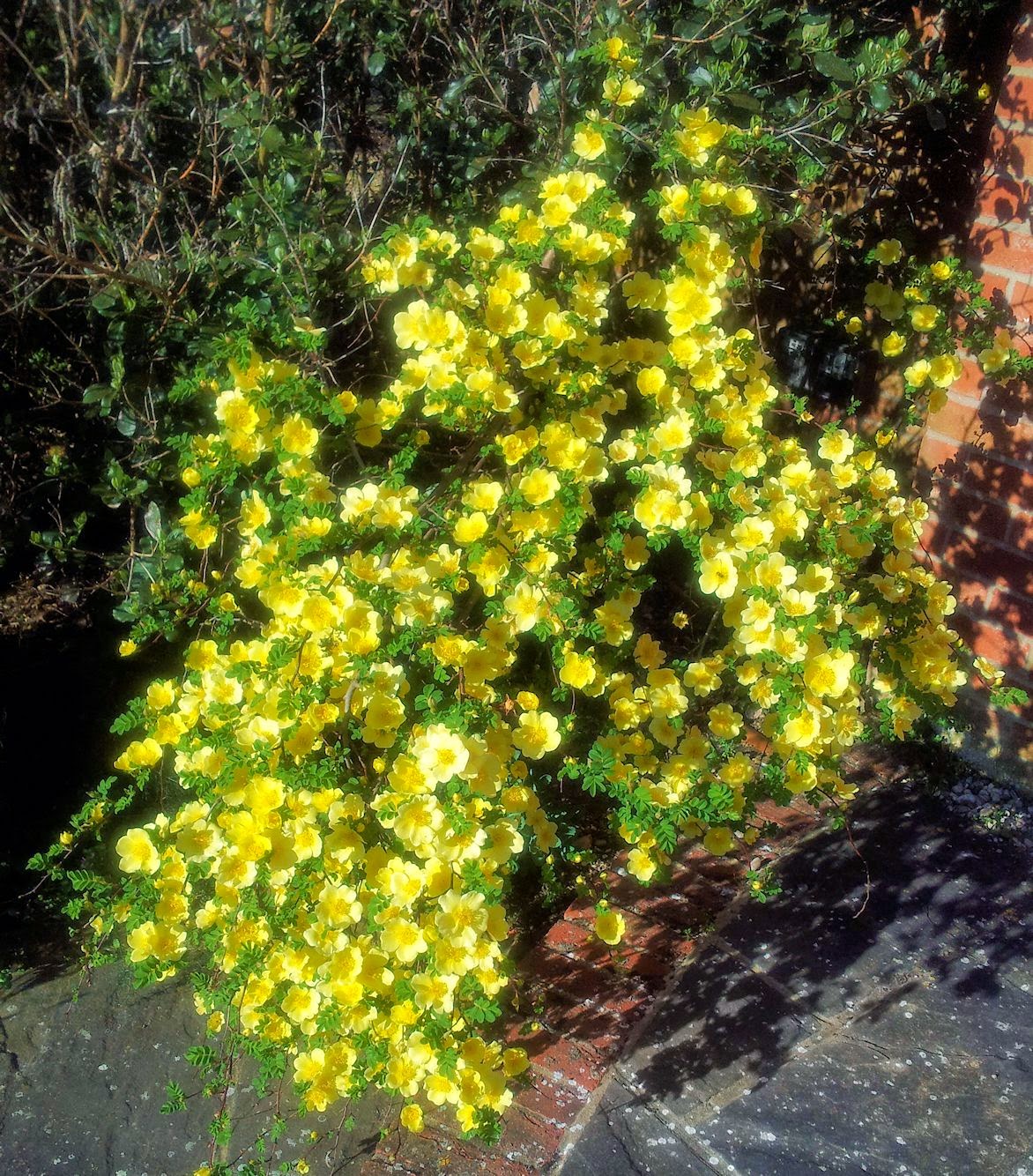 It's running a bit rampant on the front: 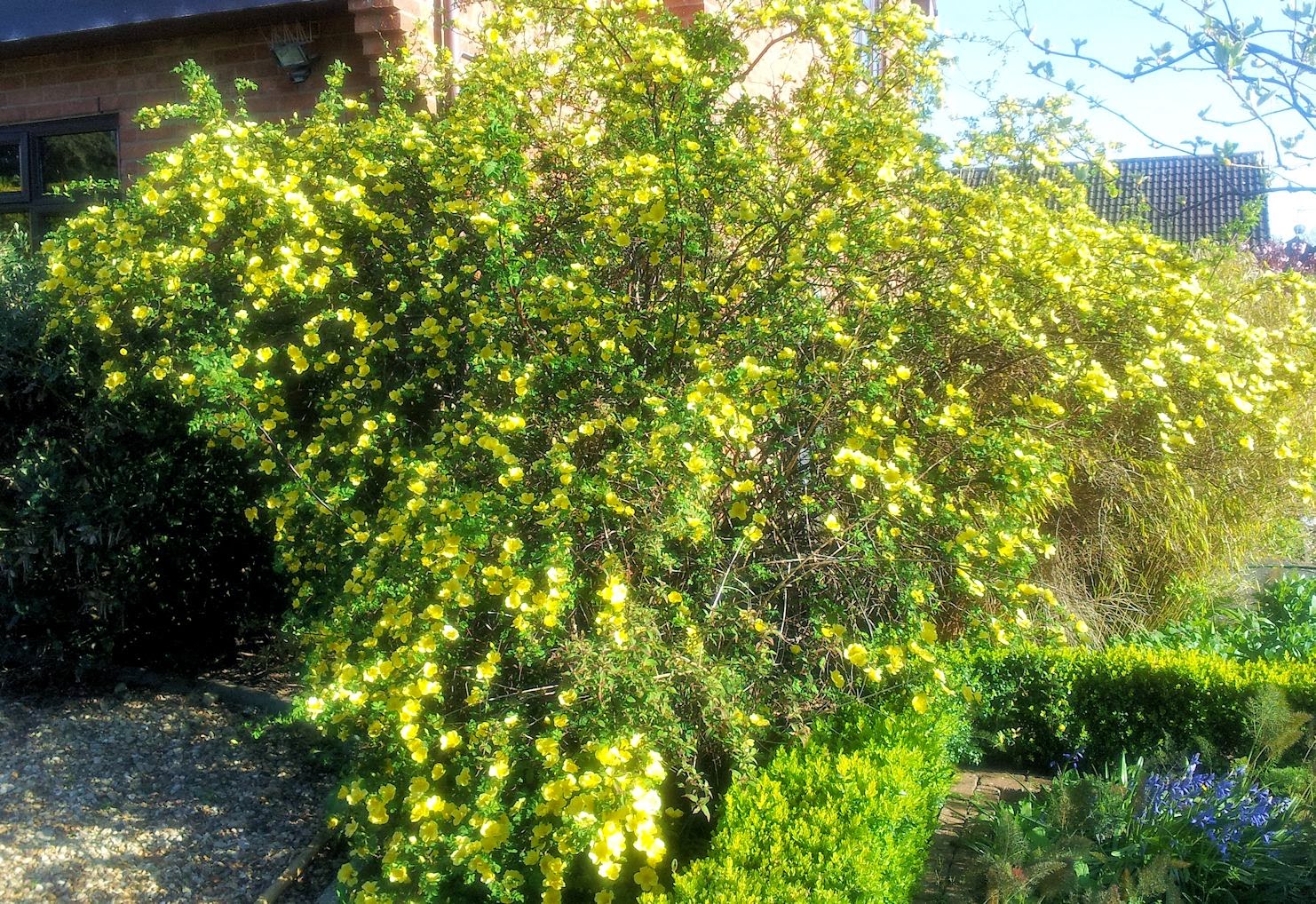 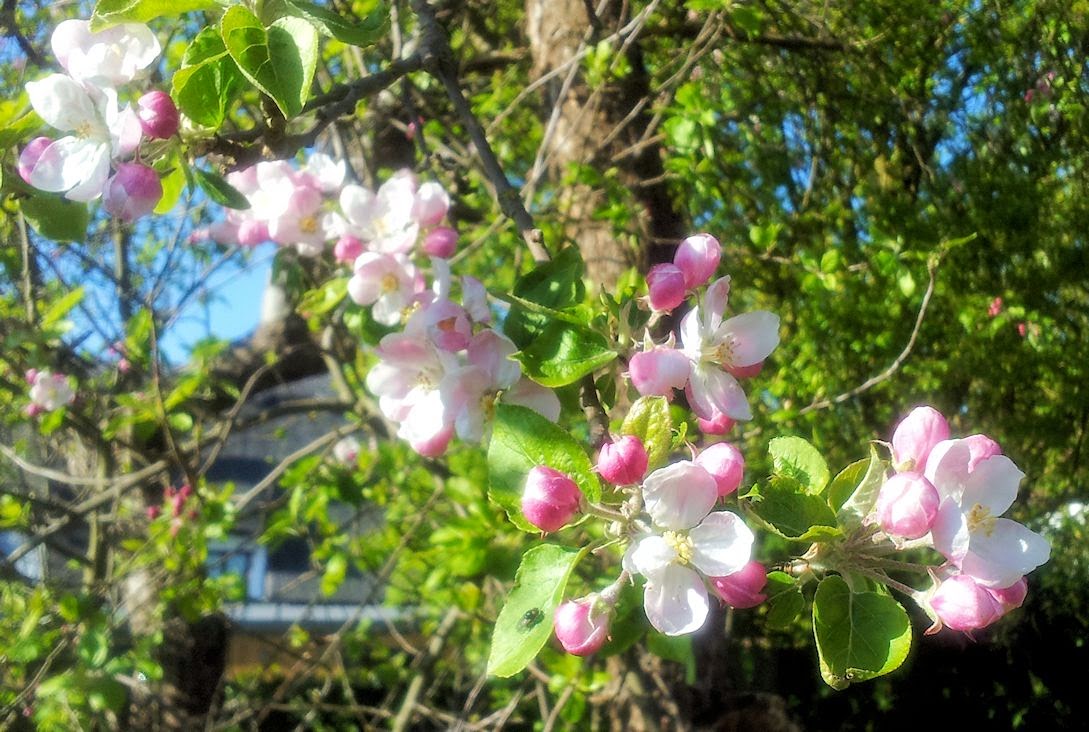 The trees we planted along the back a few years ago are doing well. 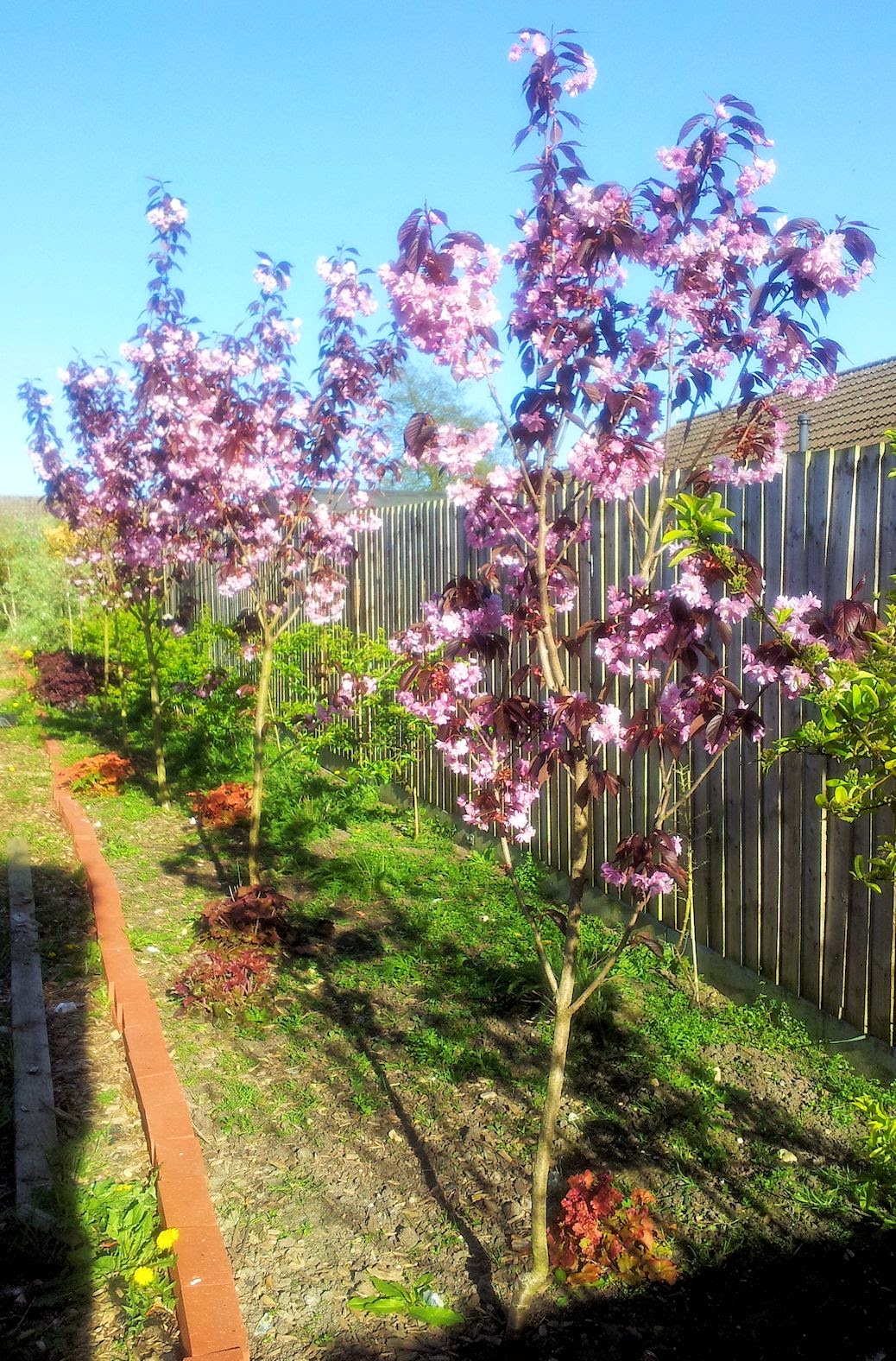 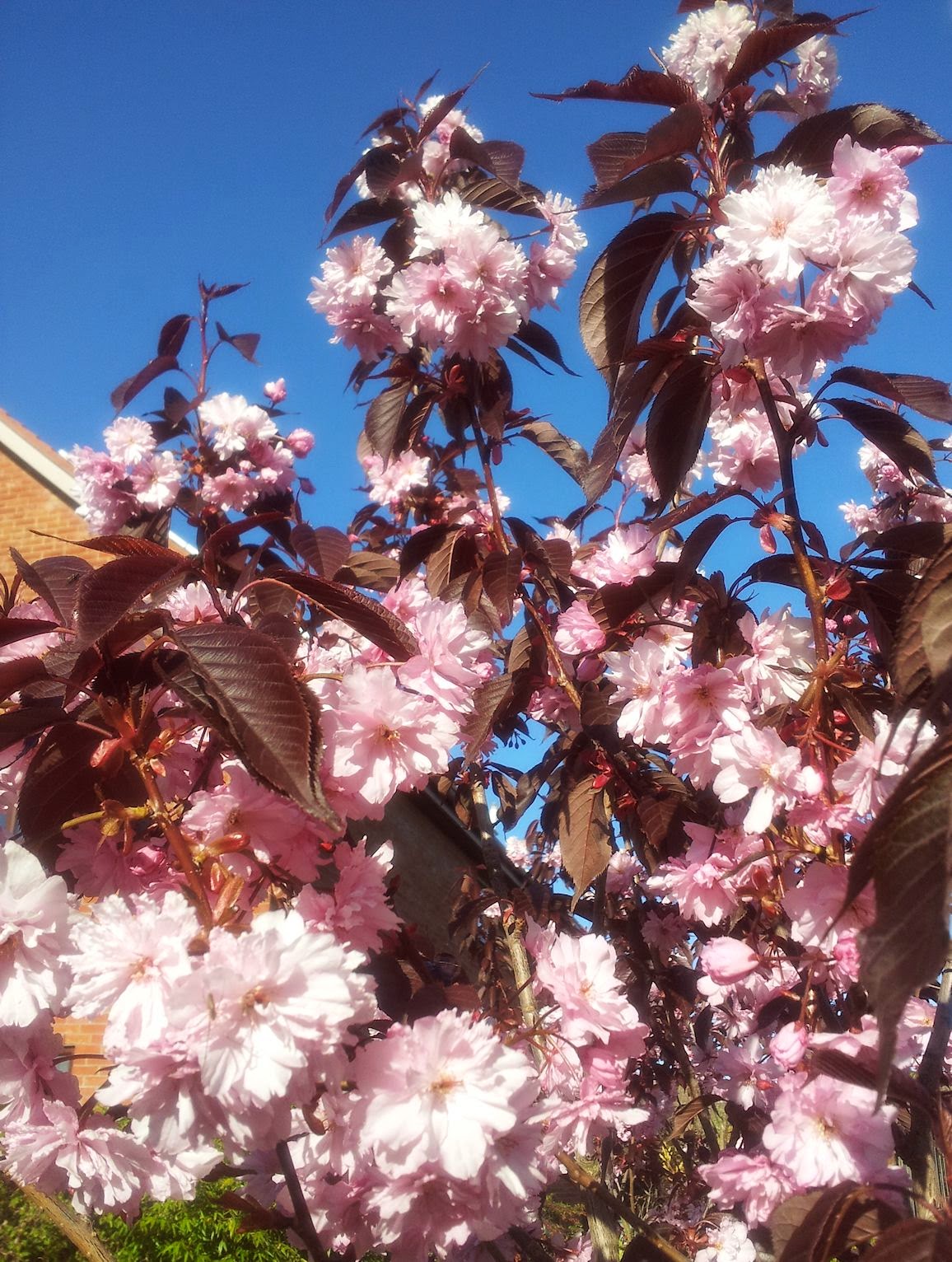 Oh, and all that sunshine is generating lots of electricity, too! 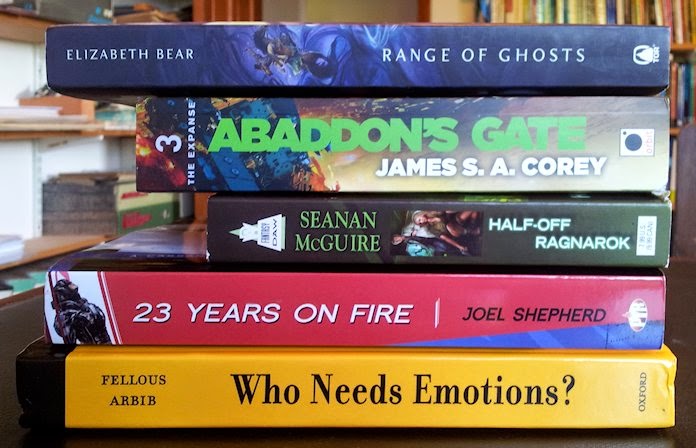 Labels: solar power
We have had our solar power system for three months now, and in that quarter, we have generated a smidge over 2000kWh, or 2MWh.  That sounds a lot!

According to Wikipedia, Drax power station generates 24 TWh per year, which would have been 6TWh during the same quarter.  So we are 300 nanoDrax-equivalent (or Drax is 3Mega-house-equivalent), which rather puts things in perspective.

However, over that same quarter (again according to Wikipedia), Drax would have produced 5.7Mtonnes of CO2 and 0.375Mtonnes of ash.  Our system, on the other hand, produced no CO2 and no ash: not even a femtoDrax.
at 21:05 No comments:

a new view of solar stats

The horizontal time axis runs from 3:00am to 9:00pm GMT. The vertical axis runs from zero to 8kW. The orange regions indicate the minimum, lower quartile, median, upper quartile, and maximum generation at that time, over the respective month.

The different amount of sunlight month on month is clearly visible.  The total power generated on the sunniest day each month (essentially sunny all day) was 26.5 kWh on 13th January, 41.4 kwH on 16th February, and 52.0 kWh on 24th March.  In the March plot we start to see saturation: we have an 8kW system, and so the top of the curve flattens around noon as the system generates at full capacity.

So we got another meter: a Wattson monitor, that shows not only power generated, but power used, too.  We download the data weekly as it requires an actual cable to connect the Wattson to a computer (the generation system by contrast shares its data via Bluetooth). 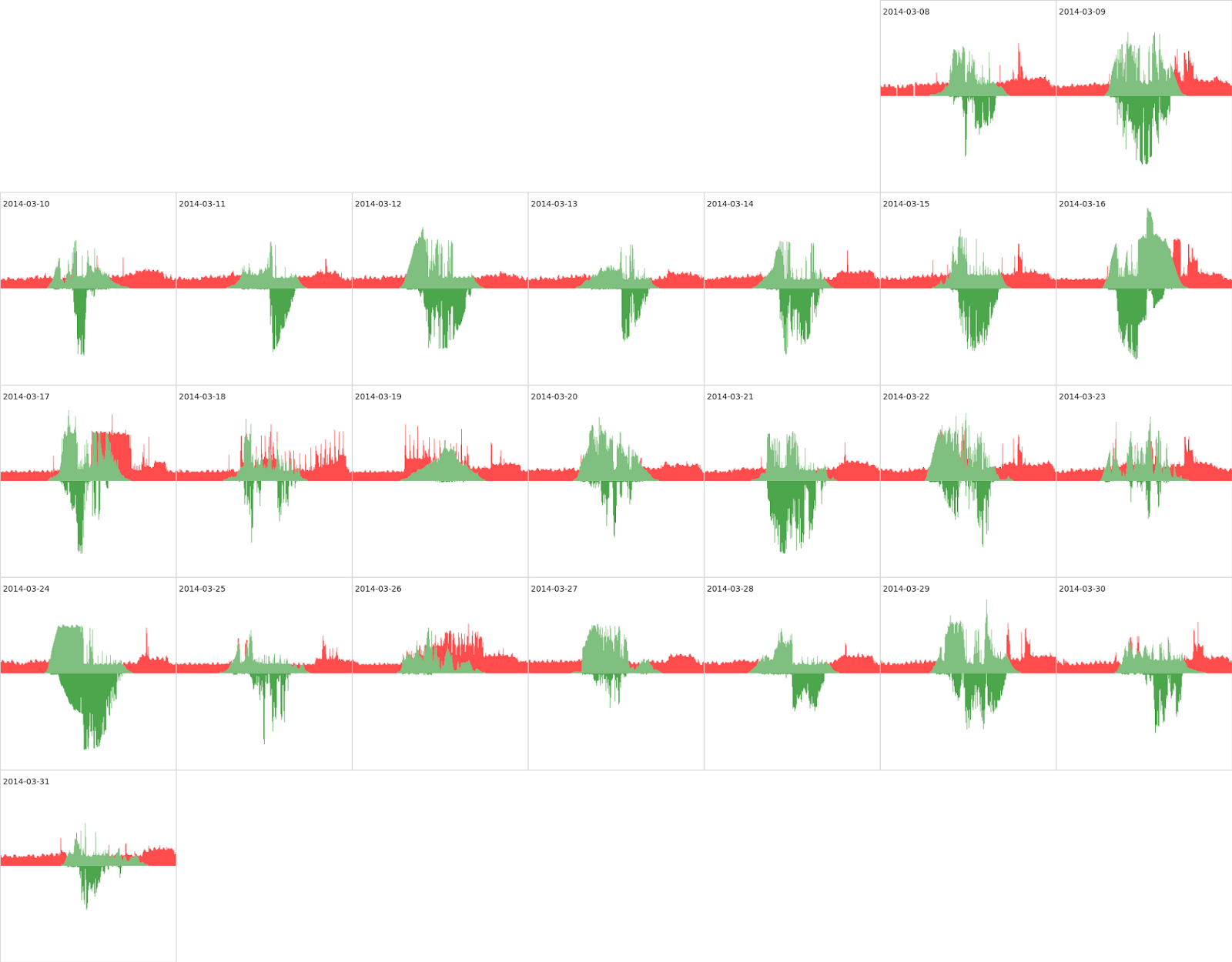 Here the horizontal time axis runs from midnight to midnight GMT/BST. The vertical axis runs from -8kW to 8kW. The region above the axis represents our usage: green is generated usage, red is imported from the grid. The region below the line is surplus generation exported to the grid.  (So the green area corresponds to total generation, or the black line in the plots above.)  During the day, usage tends to track generation.  That's because we have a system that pours excess generation into the immersion heater, up to a maximum of 3kW.

The early evening spike at the weekends is dinner being cooked in the electric oven; during the week we usually use the gas hob.  Looking closely you can often see a small red spike around 7am (when generation is just starting); this is the kettle for my morning coffee.  On the 17th, 18th, 19th, and 26th there is a lot of red: we had the “boost” on the immersion heater switched on, because the gas boiler had a fault, so we had no gas heating.

So just eyeballing these charts, it looks like we might be saving about a third of our electricity bill, in addition to what we get paid for the generated power.  This proportion will probably increase in the summer as the number of hours of daylight increases.

Then, of course, there is all the entertainment value of writing Python scripts to generate the charts, examining said charts, and speculating on the shape of future charts.  Great value for money all round!