Labels: algorithm, mathematics
This video introduces Tupper’s self-referential formula.  The formula is both more, and less, amazing that it initially seems.

a summer evening in Lyon

Labels: architecture, food, France, Lyon, research
I was in Lyon on Thursday (as a member of a PhD defence panel) and Friday (continuing my collaboration with Wolfgang Banzhaf and Guillaume Beslon on Open-Ended Evolution, emergence, and metamodels).

On Thursday evening the panel had dinner with the successful PhD candidate.  We walked from the hotel to the restaurant via the old town.


Then on to a lovely leisurely meal at Le Bouchon des Filles.

Labels: Finland, Helsinki, science fiction
Anyone know how I can get 20 clones of myself in the next fortnight?
(Oh, and they have to be delivered to Helsinki free of charge.)

Otherwise I’m going to miss almost all of the Worldcon!

I asked for the Simondon after hearing a talk by Ezequiel Di Paolo about his work at ALife last year.  And I asked for the Picturing Quantum Processes after hearing a talk by Bob Coecke mentioning it at UCNC last year.  Into the Unknown is the book accompanying the SF exhibition of the same name at the Barbican this summer; I wrote one of the pieces in it.

Labels: Doctor Who
The Master was just the dress rehearsal.

For all my social networking posts, see my Google+ page
at 17:14 No comments:

Cixin Liu.
The Three-Body Problem.
Head of Zeus. 2015
Ye Wenjie watches from hiding as four teenaged Red Guards beat her father to death during a show trial at the height of the Cultural Revolution. This experience underpins a decision she makes many years later, a decision that indirectly leads to the suicides of many physicists, her daughter included, and will soon impact every person on earth. In the present day, Wang Miao encounters a strangely addictive full-immersion computer game called “Three Body”, which may hold the clue to the suicides, and other inexplicable events.

This is a peculiarly uneven book. The setting, both in the past and the present day, is richly drawn. But all the characters seem either very flat or completely over the top, and surprisingly incurious, even those who are supposed to be investigators. Some of their actions seemed to be purely to allow info-dumping. The alien world of the game is interesting, but the degree of immersion is implausible: why would anyone actually play it?

I don’t know how much of this is due to the translation, how much to the original, and how much to a different cultural style that I am unfamiliar with. Yet there are peculiar translator’s notes in places. I expect maybe the odd note to explain something that doesn’t translate (Hofstadter has a lot to say about issues that face translation across cultures), but there are also notes explaining some of the physics, which seems outside the job spec. There’s even at one point an author’s note explaining a point of physics: infodump via footnote!

Don’t get me wrong. There are lovely touches, like an incident precisely paralleling an earlier one: Ye Wenjie isn’t the only one to make a fateful decision. The scene of stopping the ship in the Panama canal will stay with me for a while. And the solution described in the final part, explaining all the earlier weirdnesses, fully encompasses the reason I read SF. I will be reading the next in the trilogy to find out what happens next.

Oh, but I just have to say it; sorry. The computer game “Three Body” involves the chaotic orbit of a planet around its three suns. Which is, of course, the four-body problem.

For all my book reviews, see my main website.
at 21:43 No comments:

Labels: music, telephone, video
So, my upgraded phone not only no longer has the wonderful “smart alarm”, that gradually increases volume, waking me up gently rather than with heart pounding, it doesn’t have the tender Angel’s Feather tone.  And the alarm’s minimum volume is way too loud.

After a week of being jolted awake, or waking early in anticipation, I decided to see what I could do.  The web is a marvellous beast.

First of all, the hunt for the tone (I had the name from the old phone) led me to a YouTube video.


Who wouldn’t want to wake to that?

Then a trip to OnlineVideoConverter to convert to mp3.  I downloaded that to the music directory on my phone, then selected it as my alarm tone.  Yay!

But still too loud.  The alarm has only a very coarse volume control. So back to the web, to MP3 Louder, and decrease the volume by 3db.  Download the new version.

But why Samsung had to remove both the smart alarm and the tone in the first place ... grumble, grumble ... 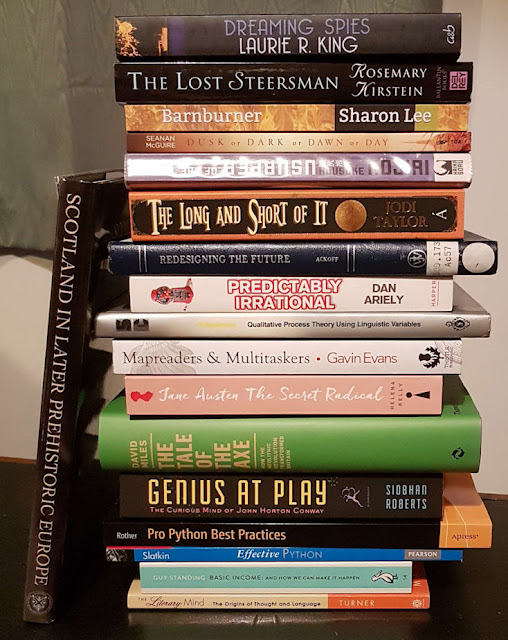