Total Eclipse of the Flowchart

Labels: algorithm, Bonnie Tyler, Doctor Who, science fiction, web
I'm a Meatloaf/Bonnie Tyler/Jim-Steinman-as-lyricist fan. And the song "Total Eclipse of the Heart" has extra sfnal resonances for me, too. Several years ago, at a Science Fiction convention, I watched Dave Lalley's "Miscellaneous 2" tape, a compilation of 1970s and 1980s TV clips of adverts and songs. Near the end is a wonderful edit of a load of Dr Who (ToS) clips to Bonnie Tyler's TEotH -- marvellous. Nowadays there are several different YouTube videos, featuring clips of the new Doctors.

So when my other half said "Google Total Eclipse of the Heart flowchart", I did. And found the wonderful 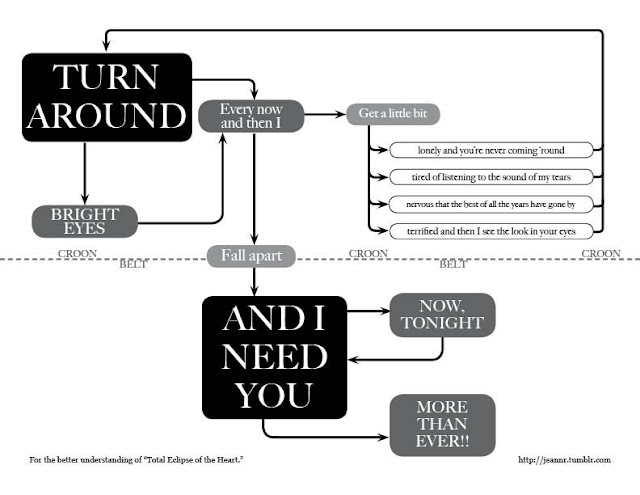 at jeannr's blog. (Although the professional in me is obliged to point out that it isn't a flowchart, but a railroad track syntax diagram.)

Digging further through this marvellous blog, I found that the idea had been further elaborated by her followers. There's a more detailed chart 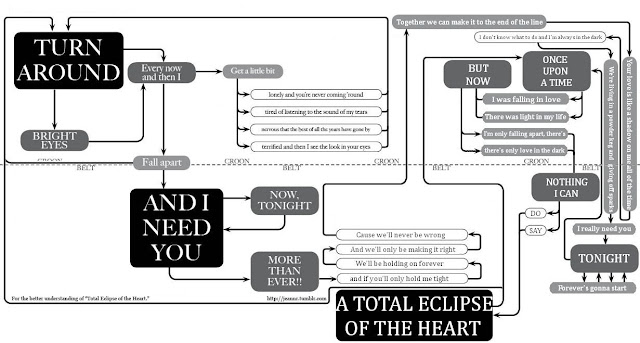 and even a video of the chart being drawn dynamically as the song is sung (by the cast of Glee, but, hey).