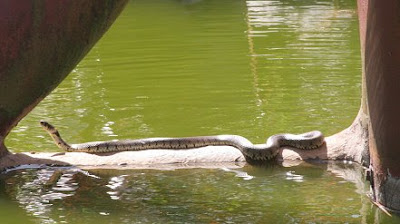 First frogs in our garden pond, now snakes. Here's a happy grass snake sunning itself in the bright April sunshine, stretched out along part of the spaceship in our pond. 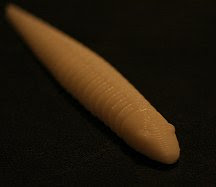 But we also have a new plastic snake.

The Makerbot 3D printer arrived at work last week. Now assembled, it has printed a couple of test-snakes, a test-Millennium Falcon, and a test-project logo.

It has also destroyed two of its three plastic conveyor belts (tip: don't try to print at a z-coordinate less than zero).

A colleague at work, seeing our new toy tool, asked "why do you want a 3D printer"? Who wouldn't want one? I think he meant "what are you going to use it for?" Printing antennae for robots, actually. To start with.

There has been lots of hype about 3D printers, so I was not expecting the surprising feeling I got when I picked up the plastic snake. It's tougher than I expected (although I have now broken it, of course...), and yet it's flexible. And the resolution is better than I was expecting.