Here's the semi-obligatory photo from my hotel window, with the cathedral visible in the distance (oh, the bells! the bells!): 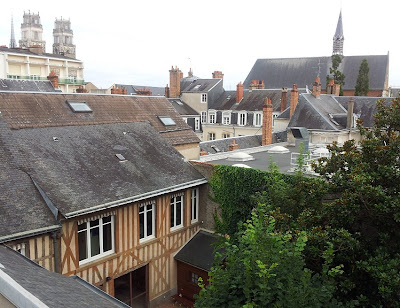 As well as the packed science programme, there was the customary conference event.  The conference organisers spoiled us with a choice: a visit to Chambord Castle, or kayaking on the Loire.  Unsurprisingly, I chose the castle.  Very impressive, with an excellent guided tour giving us all the history, from its original use as a hunting lodge, to the bullet holes from WWII.

It's difficult to know how much to believe on these tours.  We were told that eating with a fork was introduced, because it was needed to get past the ruff worn around the neck. It sounds no sillier than the reasons behind any other piece of etiquette, but I can find no evidence for the claim.  The web seems quite happy to credit Catherine de Medici with introducing both the table fork and the ruff to France, but doesn't connect the two, in fact claiming that the fork didn't catch on for a while. Ah well, it's a nice story.

My favourite bit of the castle was the four storey double helix staircase, allegedly designed by Leonardo da Vinci: 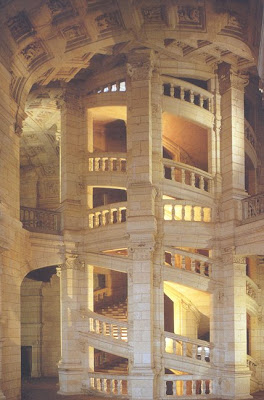 This trip was followed by a walking tour of Orleans itself, which seemed to involve a lot of different statues of Joan of Arc.

Our guide told us that all these statues depict Joan of Arc wearing a dress, because it used to be thought wrong for a woman to wear "boys clothes", as she actually did.  Why revere someone for saving you, yet deny what they actually did?

One of the things on the tour that was not a statue of Joan of Arc was Joan of Arc's house.  Except that it wasn't actually her house, she only stayed there; also, the original was destroyed in WWII, and later reconstructed, but at a different size.  It reminded me of the story of "my grandfather's axe". Identity is a slippery concept.

The availability of cheap and plentiful smart-phone photography changes what I snap, too.  As well as the obvious statues, vases, furniture, stair cases, carvings, and other typical touristy shots, I also photographed the timetable at the tram stop:

I didn't snap it (only) because it's a nice example of a stem-and-leaf plot, but because I actually wanted a copy of the timetable, for my trips back-and-forth between the conference venue and the city centre. I was accused by my colleagues of taking the most boring tourist photograph ever.  And then one of them photographed our restaurant receipt, for their expenses claim...