Labels: astronomy, Doctor Who, history, holiday, Manchester, mathematics, science fiction, telescope
Saturday at the Manchester Mancunicon Easter science fiction convention started in the traditional way, with a cooked breakfast including a generous serving of mushrooms.  We then made the mistake of returning to our 4th floor room, to pick up our stuff for the day.  It was a mistake, because the 23-floor hotel has a paltry three lifts and no (usable) stairs.  After a 20 minute wait, seeing lifts fly by, or full lifts stopping, we finally managed to squeeze in one.  But because of this we arrived late for the 10am session (Dave Clements’ talk on How Space Science Happens), to find the room packed to overflowing.  So we went to the Art Show instead.  And didn’t make the mistake again of trying to use the lifts during the day. 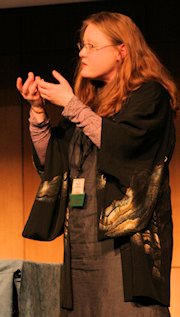 So the first talk of the day for us was Rachel Dickinson’s BSFA lecture on Crafting the Future: Ruskin, Textiles and Visions of Futures Past.  As usual at EasterCons, the annual BSFA lecture was excellent.  Ruskin was all about individual making aesthetically good and beautiful choices, particularly through choice of textiles and clothing: a universal interest, for everyone wears clothes, which should be comfortable, functional and attractive.  He contrasted individual-based craft work with the mass produced products of the grim, dark textile mills blighting the landscape around Manchester.  What was fascinating was the reaction of the mill owners: some wrote to Ruskin explaining that they would go out of business, with accompanying loss of employment for their workers, if they followed his approach.  He was aware of the issues, and wanted people to follow the overall picture, if not all the details.  Is this a more realistic vision today? 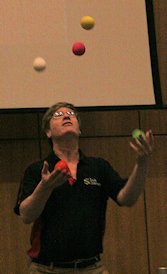 After the BSFA lecture was the annual George Hay memorial lecture, sponsored by the Science Fiction Foundation.  This year Colin Wright spoke on The Mathematics of Juggling.  Hilarious, brilliant, a technical tour de force (complex juggling while talking!), and with some deep maths to explain the patterns, leading to the deduced need for a time-travelling ball.  He’s going to be a hard act to follow.  The admiration was a two way street: he complimented the audience for getting all his technical and SF jokes.

Next came a talk by Verity Allen, on Designing the Supercomputer for the World’s Largest Radio Telescope.  The radio telescope is the proposed Square Kilometre Array, and it will produce a truly prodigious amount of data: 5 thousand Petabytes/day (1 PB = 1000 TB) initially, then up to 100 thousand PB/day if phase 2 gets built.  This amount of data offers interesting engineering issues, covering input, storage, buffering, memory bandwidth, and processing.  And they need to architect the system for hardware that hasn’t been invented yet.

Then off to hear Ian Whates in conversation with Guest of Honour Sarah Pinborough.  This included discussion of why she went into teaching (the grant was better than the alternative wage) and her pupils’ reaction to being shown The Texas Chainsaw Massacre, her ex-father-in-law coming to live with her while he was dying, and, sometime, her books.  Hilarious and eye-opening.

The Ecology of Doctor Who had Smuzz talking through how stories in Dr Who were alternately mirroring, or pointedly ignoring, a variety of ecological issues happening in mundania, backed by relevant clips (once the technology started working).

And continuing the Dr Who theme, we wrapped up the Saturday with  An Adventure in Time and Space: 53 Years in 53 Rels: the entire Dr Who canon performed by five people in 53(ish) of your earth minutes.  Rib-achingly funny, and clever.  The Reduced Shakespeare Company has a lot to answer for!