Labels: books, food, holiday, Manchester, moon, Paris, review, science fiction
The first item for Sunday at the Mancunicon Eastercon was a panel on Terraforming Planets and Living in Space in SF, excellently chaired by Helen Pennington, who used a sequence of well-designed questions to move her panelists through an interesting discussion.  The scope gradually increased, from bases in orbit, to the moon, solar system planet, and beyond.  Ian McDonald is taken with the idea of moon bases, because people on earth would be able to look up and see the lights on the moon.  We could try terraforming Venus with earth extremophiles: take a few litres of silt from the deep sea tranches, and see what happens; it could destroy any Venusian life, thereby following a long earth tradition.  The discussion moved on the economics of generation ships, travel between colonies, and how to contain diseases (you can’t).

The panel If You Don’t Scream You’ll Laugh discussed how to blend horror and comedy. There were varied attempts to define both horror and comedy, which led on to a definition of cognitive dissonance.  Both horror and comedy are a tone that can be used in any genre.  By adding a layer of comedy, it is possible to go deeper into the dark, and laughter can be a reaction to unease: black humour is daring the audience to laugh.  Horror can sometime be unintentionally funny when it just gets ridiculous.  Humour is cultural: Americans laugh at Hamlet.

Next came a panel on Book Reviews in the Age of Amazon.  Since I’ve been reviewing (nearly) all the book I read for (nearly) 20 years, I was interested to see what people thought of reviews. One of the panelists writes his reviews for exactly the same reason I write mine: to help us remember what we have read.  The panel drew a distinction between an opinion, a review (a supported opinion), and a critique (a more objective, analytical review).  You don’t have to enjoy, or even read, a book to enjoy a good critique of it.  (So my own pieces range from opinions to reviews, and are definitely not critiques.)  Blog reviews aren’t important for sales: a terrible review in the New York Times will sell more books than a great review on a blog.  But some Amazon reviews are in fact critiques: seek these out; the 1 star and 5 star reviews are telling you what the reviewer thinks; critiques will tell you whether you will like it. 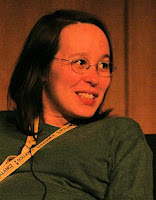 Next was Kari Sperring in conversation with Guest of Honour Aliette de Bodard.  This covered a range of topics from demons in her fictional Paris, to Vietnamese language and cooking.

This segued nicely into a panel on Food, Glorious Food – Cooking in SF&F.  One panelist, describing moving house: I had 120 boxes, 115 were books, half of which were cookbooks; the other 5 boxes were kitchen equipment.  Aliette de Bodard noted that the recipes on her website get as much traffic as her books.  Even when fiction includes food, which it doesn’t often (books can include not a single meal), it rarely talks about cooking it.  There are some earth species that eat infrequently: maybe some aliens eat only once a week?  What about cooking in zero g?  Most cooking techniques rely on gravity.  And, of course: To Serve Man.

After this, it seemed appropriate to round off the day with a nice meal with friends.
at 23:00