Labels: Birmingham, conference, mathematics, science fiction
Our final day at the Eastercon, with only three events we wanted to go to – so we spent a lot of time chatting to friends, plus a quick walk round the lake to the retail outlet in search of a new teapot (we failed).

First was an illustrated talk on Science Fictional Pub Signs.  Due to technical difficulties the pictures weren’t available until well into the talk.  The presenter did a sterling job of presenting without slides, then rapidly re-presenting once the slides appeared.  The signs were mostly fantasy rather than SF, such as Mermaid, Angel, and Unicorn, but there was one nice one, Vulcan, depicting the Roman god of fire and a bomber and Leonard Nimoy.  Some of the signs are double-sided, with a different picture on each side.  Interesting fact for the day: up to the 18th century, the signs were getting bigger and bigger, then one collapsed and killed four people, and so they were restricted to their current size. 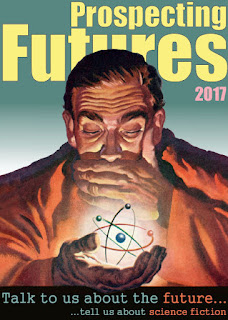 Next was a presentation by Dr Amy Chambers on Prospecting Futures and Expert SF Readers.  This was about a current academic research project Unsettling Scientific Stories, which I first heard about when I was on the (Don’t) Ask the Scientist panel with Amy at last year’s Eastercon.  Amy talked about how readers can engage with multiple story worlds, keeping them separate (echoing Will Tattersdill’s dinosaur talk on Friday).  The engagement is with the entire storyworld, built up from individual stories and from other inputs, so each actual storyworld is personal to the reader [which might help explain disagreements about how interesting various worlds actually are].  For example, Bladerunner (set in 2019!) is an adaptation of the storyworld, rather than of the novel, and it is a hyper-detailed storyworld.  Interesting discussion ensued.  For example, the term “expert” reader put off many in the audience: we might consider ourselves experienced, possibly even skilled, but probably not expert.  If you want to get involved in the research, as an experienced reader, you can start by filling in the quick survey on the project website.  And there’s going to be a 3-day academic conference in York immediately before Follycon (in nearby Harrogate) next year, to present the project’s findings.

The final event of the con that we attended was Nicholas Jackson’s now almost obligatory talk on some fascinating aspect of mathematics.  [Maybe he should entitle the series Serious Mathematical Talks or something?]  This year his talk was on Mathematics and Language, enlivened as usual by anecdotes (like the head of a university maths department telling a visitor “any other way of caring for these people would be more expensive”), mathematical jokes ( “I used to say that I can still think in a normal way, but then I realised that ‘normal’ means ‘at right angles’”), and historical details (with jokes, like a slide titled Galileo Galilei (Galilis, Galilis, Galilorum) – which is apparently an Eddie Izzard joke).  The language of mathematics is like a Matryoshka doll of concepts: you can keep unpacking definitions, illustrated first by defining a group, defining the terms used to define a group, defining the terms used to define the terms...  A mathematician needs to internalise, to grok, each level, which can then be used as building blocks for higher level concepts.  So we end up with things like “a quantum group is a quasitriangular Hopf algebra”, where “a Hopf algebra is a bialgebra with an antipode”, and so on.  Oh, and a quantum group is not really a group, and not especially quantum; but then a peanut isn’t a pea and isn’t really a nut.  The talk moved on to notation, including the Kauffman Bracket for calculating properties of knots, and then “generalised abstract nonsense” (category theory), by which point most of the audience, myself included, were totally lost, but happy to be along for the ride.  It concluded with a description of technical vocabulary, and how a couple of mathematicians came to grief in an airport when they were discussing ”blowing up points on a plane”.  [My own favourite example is the physics phrase "the moment of a couple in a field".]

Then it was off to drive home.  We tried stopping at a couple of places for dinner, but they had each shut early.  Clearly, the hordes of people all travelling home on a Bank Holiday are not going to want to eat.