One technique he describes that fits his philosophy is the "stem and leaf" plot. Let’s say you have two sets of 50 exam marks as percentages, and you want to examine the data.  One way to see the spread is to plot the marks, maybe as a histogram. That shows the distribution, but loses the information of the specific scores.  The stem and leaf plot provides the best of both worlds: a graphical overview and close up values.  The "stem" shows the tens values, and the "leaves" show the remaining digit values.

Stem and leaf plots can also be used to good effect for bus and train timetables. In this case the "stem" shows the hours, and the "leaves" show the minutes when the transport is due.  For example, Nottingham tram timetables use this approach. 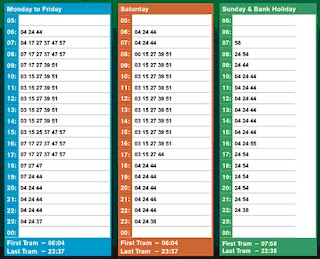 You can immediately see, with a distant macro-reading, on weekdays the most trams are at rush hour, on Saturdays they are more evenly spread , and they are rather more infrequent out of hours and on Sundays.  Then you can look closer for a micro-reading, and see the actual tram times.

These plots have been around for a long time.  The latest New Scientist (2 May 2012) reports an analogous approach for greyscale plots: "FatFonts", conceived and developed by Miguel Nacenta, Uta Hinrichs, and Sheelagh Carpendale.

With a FatFont, the amount of ink used to print a digit is proportional to the value of the digit: so a 9 uses nine times the ink as a 1, for example.  Instead of plotting a greyscale pixel on a graphic, plot the actual value using the FatFont.  For more numerical resolution, simply use a second digit one-tenth the area of the first (and a third digit, one tenth smaller again, if needed, and so on, until resolution fails). From a distance, the macro-reading is a greyscale image; closer up, the micro-reading shows the digits, showing the numerical values.

Here's an image of the terrain around Etna on Sicily, from the FatFonts galley page: 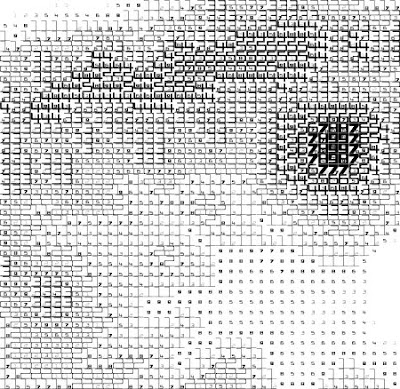 Typewriter art, ACSII art, and photo mosaics achieve a given picture (macro-reading) by using very many small characters or picture "tiles" chosen to have the right density or colour.  But with those techniques, the micro-readings are not usually of interest.  FatFonts, on the other hand, give a useful graphical tool.