AV or not AV? That is the Referendum.

Labels: politics
On the 5th of May, the UK has a referendum on whether to change the way we vote for our MPs from the current "first past the post" (FPTP, the "No" campaign) to the Alternative Vote system (AV, the "Yes" campaign).

I had been intending to vote "Yes" (for AV). Then I saw material from the "No" campaign. That material has swayed my decision –- to absolutely absolutely vote "Yes". The "No" campaign's distortions and/or stupidities are just shocking. (It is interesting to see the campaign, since there are party members from both major parties in each of the Yes and the No camps -– strange bedfellows indeed.)

So, what’s the fuss?

With FPTP, you have a list of N candidates, and put a cross next to one of them; the candidate with the most crosses wins. With the proposed AV, you have a list of N candidates, and rank them, putting 1 for your first choice, 2 for your second. You can go all the way up to N, ranking the lot, or stop sooner, when you don’t care about the ranking of the rest. The first preference (those with a 1) are counted. If someone gets more than half these votes, they win (this is only likely in a "two horse race", or where the further "horses" are rank outsiders). Otherwise, the candidate who came last (the one who fewest voters wanted as first choice) has their second preference votes redistributed to the rest. This carries on (the last candidate’s votes redistributed) until someone has more then 50%, and wins.

Under AV, however, I can safely put PolkaDots first, then Maroons. I probably leave off the Turquoises, or put them third, depending how I decide to indicate my disgust with them. (In fact there's always a smattering of really minority candidates: I hate the Turquoises so much I'll even put the looney StripyParty above them, but I'll put the Turquoises above the CrossHatches, who are just plain evil). My support for the PolkaDots gets counted, even though they come third, and then my second choice is given to the Maroons, who win. I'm not devastated: PolkaDots third again, but at least I got Maroons, who I can live with, and my real support for the PolkaDots got counted.

But maybe, just maybe, enough people do this, and hey, the Turquoises come third. Their votes are redistributed. And since no Turquoise supporter would be seen dead in Maroon, their second choice votes are for the PolkaDots. And we win! And those Turquoise voters aren't devastated either: they came third, but at least the hated Maroons didn't win. The compromise candidate dissatisfies least.

Sounds sensible enough. Maybe there is a hidden problem that makes AV disastrous? After all, there's Arrow's theorem, that basically says, given some axioms desirable in any voting system, the only voting system that obeys those axioms is a dictatorship. So it seems there is no "fair" voting system: maybe AV is less fair than FPTP? 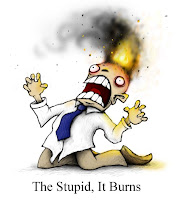 If so, the FPTP "No" campaign will be pointing this out. So, let's look. Oh.

Then their campaign leaflet fell through the letterbox.

Two: complaints about the cost -– "£250 million", the cost of electronic vote counting machines and education in the new system. This is contrasted with what else the money could be spent on (always a dubious tactic -– just because money isn’t spent on one thing doesn’t mean it will be on something else): "2,503 doctors, 6,297 teachers, 8,107 nurses, 35,885 hip replacements or 69,832 school places". First of all, notice the tiny "or" in there: it's doctors OR teachers OR nurse OR hips OR school places, but formatted to look like them all. Also, is that a salary for a month, a year, the lifetime of the person? Compared to the £250M, is that per year, per election, or what? Bad statistics.

Three: "The second or third best can win under AV" versus "Under our present system, the one who comes first is always the winner". Notice that weasely use of the word "best". Voting for your Parliamentary representative is not at all analogous to a horse race or foot race, where the fastest, the best, is first past the winning post. It's more analogous to a group of people choosing where to go for an evening's entertainment, where 40% love skating, hate football, and are fine with the cinema, and another 40% love football, hate skating, and are fine with the cinema, and the final 20% love the cinema (and they all have to go to the same place, rather than split up). With AV, it's the cinema, and everyone is reasonably happy; with FPTP it's either football or skating, with 40% very unhappy. What then is the "best" choice? Why should the "one who comes first" (is most people's first preference, even though that's a minority of the people) be the winner? After all, under FPTP, just because there is a majority for someting doesn't mean there isn't a bigger majority against it! Undefined (and misleading) terminology, combined with false analogy. (I can’t complain that they use "FPTP" terminology, as this is the standard name for the system; I can complain when they use it as an analogy, poorly). 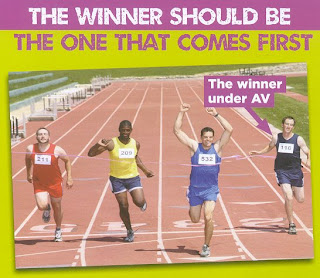 This is accompanied by a photograph of a foot race, with an arrow to the guy in last place (subtly dressed in black, to boot), saying "The winner under AV", not so subtly implying this it what always happens. (There's also the minor fact that the person who comes last -- has fewest first preference votes -- can never win under AV, as their votes get redistributed first.)

Four: "It is wrong that the person who came second or third can overtake the person with the most votes and be allowed to win because the second, third or even lower choices of supporters of extreme parties such as the BNP are counted again and again and again." More fear mongering, by naming an extremist minority party. What about other, non-extremist, minority parties? If I like the looney StripyParty, so put them first, then the PolkaDots, then the Maroons, then the Turquoise, why shouldn’t my wish for the Maroons-more-than-Turquoise be counted just as much as that of a Maroon-firster? (This argument appears to be the source of the "Keep One Person, One Vote" slogan.)

One argument the No campaigners don't use in their leaflet, but that I have heard others use, is that AV might even allow some nasty extremists to gain power (if they were everyone's second choice, say). Well, there's a name for specially designing an electoral system so that it stops those nasty people you don't like from winning: undemocratic. Rather than squelching all those nasty bigots by disenfranchising them, I'd much prefer a system that helps educate them out of their bigotry, and an electoral system that doesn't encourage extremism in the first place. So I was disappointed by the Electoral Reform Society's otherwise excellent site on AV, for saying that AV "penalises extremist parties, who are unlikely to gain many second-preference votes." I would rather it said that such parties wouldn't end up with an unfair advantage (thereby countering the fear-mongering) rather than "penalises" (which smacks of being undemocratic).