Labels: computer
I have been resisting moving from MS Office 2003 to any of the more recent versions. However,  my new machine at home has Windows 7 and the newer MS Office.  So I have to grin and bear it.

The main reason I didn't want to upgrade is that I hate-hate-hate the "ribbon".  It's ugly, it's cluttered, and it seems to encompass a work flow orthogonal  to mine. 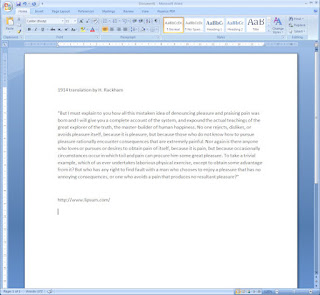 However, it struck me after I had changed the default blue wallpaper on my home machine to the Hubble Deep Field photo, that another reason I dislike the latest Office is that it is so very very BLUE.

Ah!  Surely I can change that?  After much hunting (did I say that I hate the interface?), I discovered a "Word Options" button skulking at the bottom of the main menu (you know, that absolutely crucial menu that hides behind a little circular icon that looks nothing like a menu button?)  I clicked it, and I found that one of the "popular options" allows me to change the colour scheme.  Result! 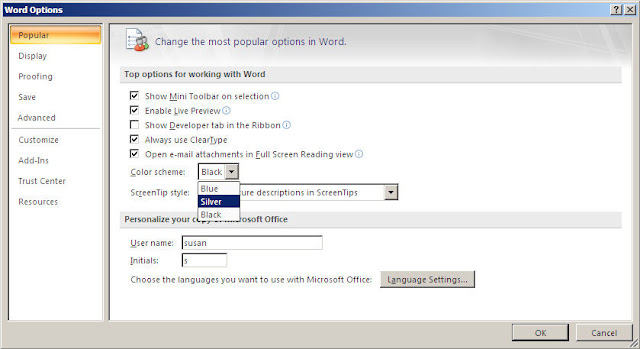 What, a whole three options?  What an embarrassment of riches! 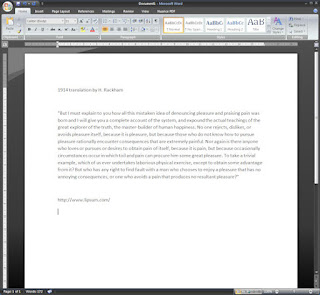 Better. But my goth period is long past.  What about "silver": 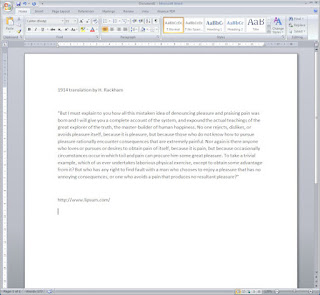 Much more civilised, if somewhat ... grey.

So, I've now set the option to "silver" (I set it in MSWord, and it magically propagated to Excel and Powerpoint), and I now only hate it when I look at the ribbon (which, of course, I have to do every time I need to do anything more complicated than plain typing, ie all the time), rather than looking anywhere else on the screen.  I suppose that counts as a win.
at 09:04 No comments:

Yesterday, I got an even more ridiculous one:


I recently came across your research paper titled "."

Unsurprisingly, I don't actually have any publications with the null title!  Okay, so it's an amusing scripting error.  But the email continues:


In this everchanging world, where every new discovery refutes the previous ones,

"every new discovery refutes the previous ones"  Really?


your research is thoroughly path breaking and novel.

So novel that no title can adequately encompass it.


To provide more leverage to your work, I invite you to submit your upcoming research articles / papers for publication in [redacted], an international double blind peer reviewed research journal.

This may be noted that due date of forthcoming issue [redacted] is 15th March, 2013.

The process of publication is expected to be completed within two to three weeks. Our processes follow stringent quality control measures and comply international standards in journal publishing.

Labels: birds, snow, weather
Two weeks ago, the weekend that my machine died, there was the last of the snow (I hope). Snow seems to make birds more visible.  So we were watching the bird feeder through the window, and saw several new kinds of birds.  First there was this:

On consulting our trusty bird book, we decided it was a reed bunting (or possibly a mutant sparrow).  While we were trying to identify it, we noticed another little brown bird hopping around on the ground.  I confidently identified it as a distant sparrow, then looked through the binoculars, saw it had quite a streaked breast, and a thin beak, and swiftly lost my confidence.  After consulting the bird book again, we tentatively decided on meadow pipit (or very mutant sparrow).  Then it flew up into the apple tree: maybe it was a tree pipit?  The bird book helpfully points out distinguishing features in its diagrams, such as differences in colour on tails or wings; unfortunately, there are no features indicated to distinguish between meadow pipits and tree pipits. The text says that the tree pipit is distinguished "from meadow pipit by voice, habitat; also by buffer, less olivaceous colour, pinker legs", and that the meadow pipit "perches less frequently than the tree pipit"; not very helpful features if you have only the one specimen! (The same book helpfully dubs warblers "confusing". Yet despite all this, or maybe because of it, it is my bird identification book of choice.)

While we were debating these identifications, we noticed a larger, more brightly-coloured bird. positively glowing in the sunshine, perched on the large trunk of the apple tree.  What an earth is that?  Feverish page-turning.  No doubt about it this time, it was a fieldfare.  Not only had we never seen one before, I can safely say I'd never even heard of them before.  It flew down to the ground, and pirouetted for our benefit.

Labels: computer, web
So, after the sad demise of my home PC last week, it is off to our local computer shop, World of Computers (an excellent place where we have been buying our machines for the last two decades at least), for its replacement.

Back home, I plug in all the peripherals, and now I have a beefy spookily quiet machine with all my data transferred on to it (so at least I don't have to restore from backup), but essentially no software.  This is Windows 7; given some of the software running on my previous XP machine had been ported to it eight years ago from my previous Win95 machine, I may be in for a hard time.

Then I download Chrome and Evernote, and I'm ready to start serious installation, including taking notes to help me next time.  I set the wallpaper to a Hubble Deep Field image, and I'm starting to feel at home again.

The first thing I notice is that there's a thick black border around my monitor screen, and the text is slightly fuzzy.  I remember this happening when I first got it, and that I did something that wasn't to do with setting the resolution; but beyond that -- no recall.  However, the web comes to the rescue:  googling the problem reminds me it is called "overscan/underscan" -- googling that tells me to use Catalyst Control Centre.  Which is not installed, so that's my next download.

Full screen de-fuzzified, I next install MS Office.  That's a 1GB download, leading me to wish, not for the first time, that our internet broadband was fibre, rather than some species of wet string.  The Office download page provides me with download instructions in a pdf.  So I download Adobe Acrobat Reader.  Then I look at the download instructions, which are all out of date.  But the download and installation proceeds normally without their help.

Then it's Texnic Center and MiKTeX.  This all goes smoothly, and I test it on an existing LaTeX document.  Fine, except the spell checker doesn't work, as I have set it for English, rather than English (US).  It points me to a site of dictionaries, and I download one.  This needs to be unzipped.  So it's off to the 7-Zip website for that...

Next, Dropbox.  No problem, except that it is synching a gazillion files.

Then Skype.  This leads to the usual problems of ensuring that the speakers and the webcam microphone are plugged into the right sockets.  The sockets are colour coded; the jacks are not.  After grovelling about under my desk and swapping things around a few times to no effect, I google to find out which ones to use.  And now the sounds are going in the webcam microphone and coming back out the speakers a split second later.  More googling to fix that.

Now we come to the antediluvian software.  I use Quicken 2000 (yes, 2000) for my home accounts.  It doesn't install under Windows 7.  I consider upgrading, but various websites warn me that importing the data is hard to impossible.  (Well, after 13 years of upgrades, maybe that's not too surprising.) I wonder about changing to a different package, but, hey, I've been using it for 13 years with not problems.  So, install the XP emulator, and install Quicken in that.  Point Quicken at my backup data, and it's like old times.

I have less joy with the scanner.  There are no drivers for Windows 7, and the XP emulator can't be made to see the scanner at all (despite it being a USB device).  So I swap it for Charles' newer scanner (he's still running XP, so is okay for now), then download and install drivers and software for it.

Next, it's the software I use for my website.  I edit the pages in HoTMeTaL Pro 4.0, a Windows 95 application.  Although I still have the original CD (note for youngsters: software used to come on CDs, rather than being downloaded from the web), I decide not to bother installing it -- it is just a bit too long in the tooth now, particularly since I've started using a bit of CSS.  So I have a trawl around the web, reading reviews, and decide to give CoffeeCup a go.  Download, install.  (Once I've used it for a while, if I like it I'll upgrade to the full version; I might review it.)

Next, it's the software I use to take the text output exported from my Access book database, and produce the various book review pages on my website.  This application is written in Smalltalk/V for Windows, a 20-year old, 16-bit implementation of Smalltalk.  It does not run in the XP emulator.  I'm going to have to reimplement it in a different language.  I do have it on my to-do list to reimplement in Python, but it's a non-trivial exercise (ie, more than a weekend hack), so I've been putting it off.  Bother.  Oh well, at least I'll be able to make the improvements I've been thinking about.  But that means, my book pages probably won't be updated for a while...

Nearly two days have passed, and I've still got Python, an OCR tool, and a picture editing tool to go (I suspect my copy of Paint Shop Pro 3 is just a little out of date...)  But I can now function again.
at 18:54 No comments: