Local and global models of physics and computation

Labels: computer, publishing, research, science
My paper “Local and global models of physics and computation”, in the International Journal of General Systems, has just been published online.

According to an email from the publishers, the first 50 lucky punters to click on
http://www.tandfonline.com/eprint/yEPmmkyDf42Fq8acYa7Y/full
can download it for free!

If the link doesn't work, let me know, and I can send you a copy.﻿
For all my social networking posts, see my Google+ page
at 22:30 No comments:

someone should write it! 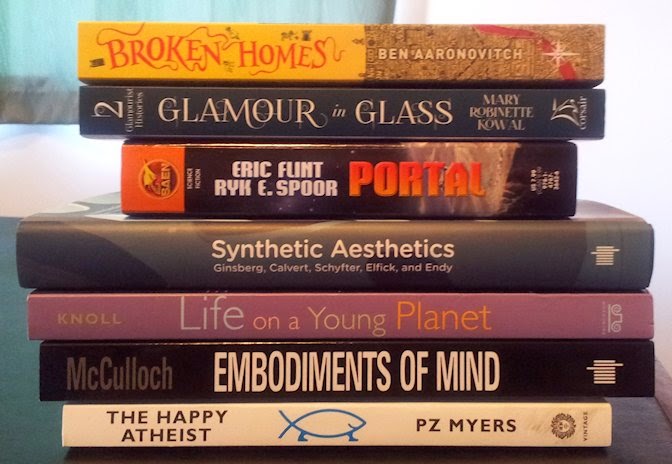 Labels: books, flight
Sitting on a plane, reading a book.
Suddenly, something hits the bottom of the plane.
Hard.
Look up in alarm.
Oh, we’ve landed.
Go back to reading book.﻿

Labels: Amsterdam, lol, Netherlands, politics
I'm stopping overnight in a hotel near Schiphol airport before travelling on to my meeting tomorrow.  As usual, I requested a no smoking room.  In Holland, that means something extra:

On the run from the Men in Hats David Norris [Matt Damon], a young ambitious politician, has just lost an election to the US Senate. But a chance meeting with the mysterious Elise [Emily Blunt] inspires him to a great concession speech, and a future in politics. A few years later, he meets her by chance again, and it looks like an Affair to Remember. But that second meeting is contrary to the Plan, it should never have happened, and so the Adjustment Bureau is sent in to put things right. David, however, is not so easily discouraged.

This is typical Dick paranoia, with a shadowy, all-powerful agency directing everyone’s lives, by consulting the unfolding Plan as composed by the Chairman to keep the humans from annihilating themselves. This Plan has David becoming President eventually, with Elise becoming a world-famous choreographer, futures that apparently neither will achieve if they are with each other, so the Bureau must keep them apart.

This is slickly made, and an enjoyable ride, as we try to figure out what is going on, why everyone is wearing a hat, and how David can beat the good guys determined to make him President, if not happy. (Not all that good guys, though: they killed off his family to make him focus on his career!) In the end, True Love wins the day, and the leads’ free will is restored to them, their future Plan unwritten.

However, we never find out if the happy couple then live out their lives in humdrum bliss, or do manage also to have their pre-planned careers. So the moral of the tale isn’t clear. Is it: True Love conquers all, or is it, Better to Have Love than a Fulfilling Career? If it’s the latter, then it’s good to see the symmetry of both sacrificing their glorious careers (okay, maybe not so symmetrical: it’s actually David sacrificing both their careers).

But why oh why is the Adjustment Bureau all men?

You know you are reading a Peter Hamilton novel when ...

You know you are reading a Peter Hamilton novel when you think “oh, I’m almost finished now!”, and there’s still more than 200 pages to go…

book review: From Elvish to Klingon

Michael Adams, ed.
From Elvish to Klingon: exploring invented languages.
OUP. 2011
Arika Okrent wrote the excellent and very readable In the Land of Invented Languages, referenced many times here. This book covers some of the same languages, but branches out into a more diverse range that could potentially be considered to be “invented”, with a much wider scope than implied by the examples chosen for the title. The various chapters (discussed below) are contributed by individual experts in the specific areas, and, as with most collections, this results in a somewhat choppy, uneven style, but it does mean that is can be read piecemeal, chapter by chapter. Adams provides his own short appendix (unfortunately printed in a microscopic font size) to accompany each chapter, expanding on some of the issues raised.

An interesting addition to the invented language literature.

• Michael Adams. The spectrum of invention.
This chapter provides an introduction to and scoping of the overall book, discussing how and why languages are invented, and what might be included as an invented language.
The appendix “Owning language” discusses how different language inventors attempt to control their languages, with greater or lesser success.
• Arden R. Smith. Confounding Babel: international auxiliary languages.
Smith provides a fascinating historical and biographical overview of the more obvious candidates for invented languages, including Volapük and Esperanto, and of simplified natural languages, including regularised Latin, Basic English, Weltdeutsch, and Saxon English (shades of Poul Anderson’s “Uncleftish Beholding” here).
Adams’ appendix “Esperanto’s zentih” provides some contemporary historical insight into Esperanto, with many acerbic news clippings.
• Howard Jackson. Invented vocabularies: the cases of Newspeak and Nadsat.
Newspeak (from Orwell’s 1984) and the Russian-derived Nadsat (from Burgess’ A Clockwork Orange) are not entire languages, but this chapter unpicks their underlying logic to show that they are more than just a few random invented words.
Adams’ appendix “Nadsat and the critics” quotes some contemporary reviews.
• Edmund S. C. Weiner, Jeremy Marshall. Tolkien's invented languages.
A look at the development of Sindarin, Quenya, and Orkish, both at how they developed over real time as Tolkien adjusted his mythology, and at their derivation from a common fictional root.
Adams’ appendix “Tolkien’s languages: a brief anthology of commentary” references some contemporary critiques.
• Mark Okrand, Michael Adams, Judith Hendriks-Hermans, Sjaak Kroon. 'Wild and whirling words': the invention and use of Klingon.
The inventor of Klingon provides an account of its genesis, structure, rationale, and subsequent uses.
Adams’ appendix “Advanced Klingon” gives examples of classics translated into Klingon, particularly Hamlet.
• James Portnow. Gaming languages and language games.
Not all imagined worlds are in books: some are in sophisticated computer games, and this chapter discusses a few languages that have been invented for interactive games, and the extra constraints there are on such languages, in particular, that it be rewarding (games should be fun), easy to learn (the aim is to play the game, not learn a new language), and inessential for playing the game (to cater for those players who are not linguistic enthusiasts). The chapter covers Gargish, D'ni, Simlish, Al-Bhed, Logos, and l337 (leet). In some the languages very few actual example phrases are given, which makes it a little hard at times to understand the points being made.
Adams’ appendix “L4ngu4ge g4m35 in g4ming l4ngu4g35” gives a leet lexicon.
• Stephen Watt. 'Oirish' inventions: James Joyce, Samuel Beckett, Paul Muldoon.
This chapter is a discussion of the inventive language games played by certain Irish writers who found English (or any other existing language) to be less than sufficient for their needs. I found this the least helpful chapter, as it assumes significant familiarity with the material in question, unlike the other chapters.
Adams’ appendix “The case for synthetic Scots” is an interesting account of Lallans.
• Suzanne Romaine. Revitalized languages as invented languages.
Some languages have dies out, either completely or nearly, then been revitalised, usually for nationalistic reasons. This chapter covers Modern Hebrew, Māori, Hawai‘ian, Cornish, and Breton, among others, as examples of revitalised languages. There are several issues. There are difficulties in bringing the languages up-to-date with modern vocabulary that is somehow faithful to the original language, and even more difficulties on agreeing how to spell both the new and the original the words, particularly when the original language had several dialects. And there are tensions between the few remaining native speakers (often poor) and the school-taught middle-class who speak a reconstructed variant language for political reasons as a second language: each find the other inauthentic.
Adams’ appendix “A reconstructed universal language” closes the circle, and discusses neo-Latin.

not higher, but broader

The horizontal time axis runs from 3:00am to 9:00pm GMT (no correction for summer time: this is all sun time!). The vertical axis runs from zero to 8kW.  The black line is the generation on the particular day.  The orange regions indicate the minimum, lower quartile, median, upper quartile, and maximum generation at that time, over the respective month.

In the March and April plots we start to see saturation: we have an 8kW system, and so the top of the curve flattens around noon as the system generates at full capacity.  So the plots can go no higher.  But the April plot is clearly broader than March, indicating the lengthening days.  We look forward to May, and especially June, to see what happens at the maximum day length.

Labels: books, psychology, science fiction
The haul over the last few weeks, including some recommendations gleaned from surfing, and a couple of freebies from the Eastercon. 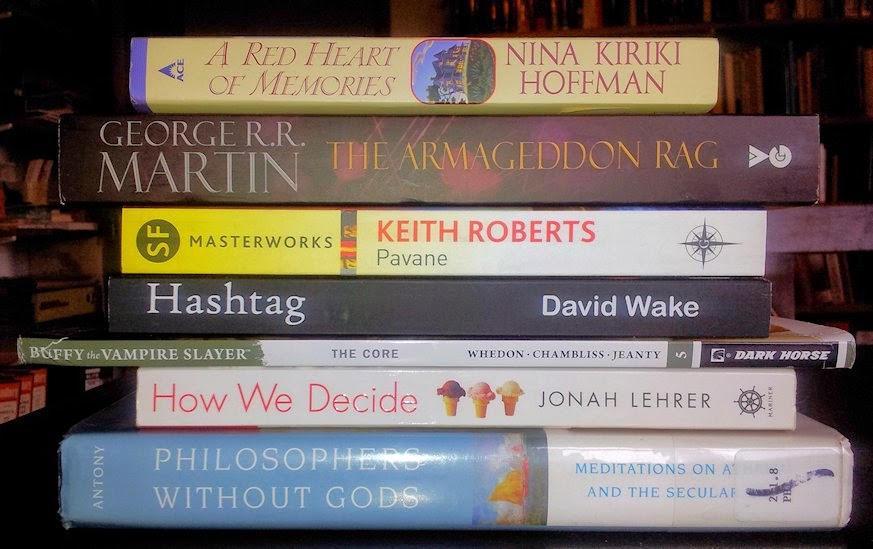