Labels: computer, telephone
It’s been nearly four years since I got my first smartphone.  Since then it's become indespensible (although a subsequent tablet acquisition made it less so: as long as I have one of them on me, I'm fine). 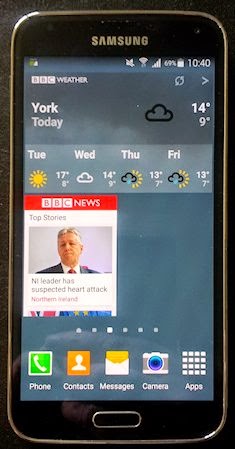 I decided to go for a Samsung Galaxy S5, for two main reasons:  Samsung, so I don’t have to learn a new style (and I know to ignore all the Samsung crud that is preloaded);  S5, because it’s got a bigger camera than the other plausible Samsung options, and I use the camera a lot.

I spent about half a day hiding all the preloaded apps, uploading the apps I use, configuring them, having a quick look at the manual to work out how to switch off various options, and generally fiddling about.  All much smoother than my previous experience, partly due to me knowing more about the system, and partly due to software/usability improvements.

So now I have a nice 4G device.  It’s a little bigger than the previous phone, so I’ll need a new case, but it uses the same power adaptor, so I don’t need to replace the several of those I have dotted about my world.

Main gripe: this is my alarm clock, and I’m used to the Smart Alarm Sparkling mist tone waking me gently in the morning, and gently alerting me to upcoming meetings.  It’s not an option the new device, however.  Why on earth remove options like this?  (I had a google around.  There are copies of Sparkling mist out there, but they are different, missing the early swoosh sound.  To get the full tone off my old phone and onto my new one seems to require rooting the devices in order to access /system/media/audio.  I’ll learn to like a different tone.)