To start the day, I went to the panel on The Times That Shaped the Science, addressing the question: How do literature/politics/art shape the way people did (or do) science?  Galileo had a strong background in literature and the arts, which meant that when he looked at the moon through a telescope, he could recognise it as a round ball, and paint it as a round ball. He loved the epic poem Orlando furioso (it was the LotR of its generation, or the Alice in Wonderland, with enormous popular impact, and even fanfic).  From this and other literature of the time, to Galileo a hero was someone who fights against all odds.  To him, being attacked and persecuted showed he was the hero, so he would go out of his way to be attacked. Nowadays we have this history of tension between science and the organised church – narratives of Galileo and Bruno – but actually these types of encounter were incredibly rare: other less confrontational people weren’t getting into trouble, despite believing similar things. The church wasn’t interested in things that were “obviously stupid”, only in things that were “nearly true”, plausible heresies that might convince the learnèd. We tend to locate agency in individual heroes and villains – historical heroes with modern opinions – and assume that the advancement of rationalism was by firebrands, and people who look like us intellectually. There were a few like that, but major changes often came from mainstream workers, confident that their results would confirm the orthodoxy, because they believed that both religion and science were true, so couldn’t be in disagreement.  We only realise in retrospect that there’s a conflict between these views.  Many advances were made by quiet people we’ve never heard of, by individual boring people who are nevertheless incredibly important.  The interesting questions depend on society of day, and what is a satisfying answer changes over time, too; when Newton said: I do not feign hypotheses, he was reframing what was an acceptable answer.  One major change occurred as the printing press  made books common: it started earlier and grew exponentially, so initially there were only a few books.  But by 1700 an author could live on book sales, rather than needing a patron: reputation became dependent on the masses, rather than the elites. [Well, that was all jolly interesting: much more engaging and intelligent than history lessons at school.] 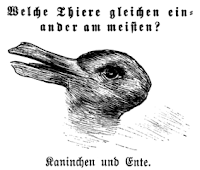 Next was a talk from Ian Stewart, the Science Guest at the con, on How to Tell the Ducks from the Rabbits, or a simple mathematical model of optical illusions.  Many illusions of ambiguity (like the rabbit-duck, the spinning dancer, and the Necker cube), and illusions of binocular rivalry where different images are shown to different eyes, can be modelled with simple inhibitory/excitory networks.  This was a beautiful explanation of a lot of weird perceptual processes.  There’s a YouTube video of a slightly longer version of the lecture given earlier in the year: well worth watching.

Then on to a panel on The Pleasures and Pitfalls of Writing Space Opera.  This is possibly the most nostalgic form of SF, and closest to fantasy without getting caught: epic tales of alien megastructures, galactic empires, space pirates…  There are similarities to historical tales, now set in the oceans of space.  They have a sense of wonder and romance: the oldest is the Odyssey: travels through a bunch of islands with beautiful women, updated as Star Trek.  Of course, empires are fundamentally unstable forms of governance, so what makes such societies work in space?  These grander schemes may form the backdrop universe, whilst the central story is focused on a single planet or ship.  Hard SF and space opera can overlap, but they not the same thing.  Yet hard SF can make for good space opera, because it puts limitations on the tech, and those limitations can drive the story.  Series can fall into the Lensman trap: save the world, the solar system, the galaxy, the universe…!

From one extreme to the other: next was the panel on High Fantasy: Is it Still Relevant?  As often, start with some definitions.  High fantasy is set in a complete secondary world; low fantasy can happen in our world with added magic.  High fantasy has elaborate sorcery; low can have obscure, mysterious, and intermittent supernatural events.  High fantasy has consequences on the world level; low is more personal, on the city level (urban fantasy) at most.  High fantasy is about the destination of the human soul en masse, a clash of powers, a vastness of magic and wonder; low is more the individual soul or life impact.  Teresa Neilson Hayden defined genre fantasy as “numinous landscapes and significant personal actions”. There are exceptions to these definitions, particularly where ordinary humans travel from our world to the other, as in Narnia or Oz.  [I was amazed no-one said "portal fantasy".]  Some fantasy is “just” historical fiction in a secondary world context; all historical fiction involves worldbuilding, with different mindsets and worldviews.  Fantasy can use the trope of the little shepherd boy/kitchen maid/apprentice who makes good: how an individual becomes great, or at least a rite of passage to adulthood.  This allows the reader to discover the world along with the character.  But it can also feature noble protagonists, although more usually in fairy tales.  French salon fairy tales are about women in trouble in French courts, using fairy tales to explain their own upper class problems.  The Grimm fairy tales are peasant folk tales about how they have survived the Napoleonic wars, and are going to rebuild German values.

Having enjoyed the previous interview with GoH Nalo Hopkinson, I went along to Nalo Hopkinson and Farah Mendlesohn: a Conversation, framed as a late night Skype call.  More interesting snippets: Farah always asks interesting questions I would never think of.

How Science REALLY Happens was a panel about, well, how science really happens.  There are no single lone hero (or even mad) scientists.  It’s simultaneously cooperative teamwork and competitive, it’s long tedious applications for funding, it’s negotiating ethics panels, it’s slogging through field work, it’s writing papers and responding to referees, and it’s all about uncertainty.

The final panel of the day was on the Future of Doctor Who.  I got into this despite a huge queue; the room seemed bigger on the inside.  The hope was for more writers bringing more variety, and no jokes about the Doctor’s new gender.  During the hiatus (1989-2005, ignoring the Paul McGann film) there was a lot of fan fiction, with female doctors, black doctors, and more: it was an age of endless possibilities.  Dr Who changes yet remains the same, much like a football team.  All the previous Doctor incarnations are still with us: will there be joint episodes as before?  Recall how the last thing Bill said to the Doctor was “you know how I’m usually all about women and, and kind of people my own age”? Ooooh!

The last event of the day was the Hugo Awards Ceremonies.  A lot of applause.  Three of the acceptance speeches were anti-puppy: one managed to be so without even mentioning them!